The biggest of all the countries in South America and also the most densely populated, Brazil (the Federative Republic of Brazil) is known locally in Portuguese as the 'República Federativa do Brasil'. Standing directly to the north of Argentina, Brazil lies on the north-easterly region of South America and next to the Atlantic Ocean, where it boasts a lengthy coastline of almost 7,500 km / 4,660 miles.

Apart from neighbouring Argentina, Brazil is also edged by a large number of further countries, such as Guyana, Suriname and Venezuela (north), Colombia (north-west), Bolivia and Peru (west), Paraguay (south-west) and Uruguay (south). Brazil was first established more than 500 years ago, when the earliest immigrants arrived from Portugal and brought with them their distinctive Portuguese culture and language.


Over the years, Brazil has become famous for many different things, including its rich soccer history, its vast Amazon rainforest, and its exciting yearly carnival celebrations in Rio de Janeiro and also within the World Heritage Sites of both Olinda and Salvador. Brasilia serves as the Brazilian capital, while other important cities include Belém, Curitiba, Florianópolis, Fortaleza, Recife and Sao Paulo, which is the biggest city in Brazil and also the most cosmopolitan. 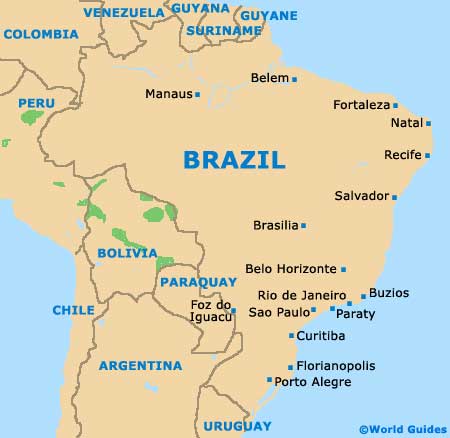