To get to grips with the sheer vastness of the Brazilian state of Amazonas, you need time - and plenty of it. It is no good expecting to fly in, quickly explore some of the more popular areas, maybe spotting the odd reclusive Amazonian tribe, and then fly out again. To get a real sense of the place, you also need a little patience and a degree of realism.

Amazonas is almost completely covered by dense rainforest. It is so dense, in fact, that it is literally hard to see the animals for the trees. That doesn't mean that the animals aren't there, of course. Amidst the greenery is an abundance of botanical species - around 5,000 in all. A huge diversity of animal species live in Amazonas, too, including reptiles, tapir and various marsupials.

The great Amazon River runs majestically through the state. The statistics for the river's width and volume of water contained within are almost beyond comprehension. Whether you choose to paddle down it in a canoe or adopt a more leisurely approach by taking a passenger boat upstream, you will be able to enjoy the same jungle sounds - monkey calls and chattering birds - and sights, including bustling riverbank villages.

At the heart of the Amazon are the bright lights of Manaus, the largest urban area in northern Brazil and a popular base for visiting ecotourists. After admiring the collection of interesting historic buildings in Manaus, stroll down to the marketplace, which is a copy of the famous Parisian Les Halles. Manaus might be in the middle of a jungle, but that is not to say that it is short on culture. The European-style Amazonas Opera House echoes to the sounds of its very own professional philharmonic orchestra. 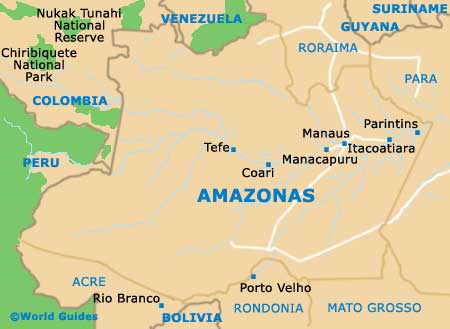