As the state capital, Belem is a large and surprisingly appealing city, enjoying a scenic spot alongside the Baia do Guajará / Amazon estuary, where it features a good selection of green spaces, often lined by large mango trees and other tropical plants. Tourists and locals alike enjoy relaxing at the centrally located park named the Praca da Republica, where various free events take place at weekends.

Tourism has become part of life in Belem and the city serves as something of a gateway to the Rio Amazonas (Amazon River), where many tourists like to join a cruise. Numerous wild and inviting islets surround the city, often being uninhabited and coming with freshwater beaches, such as both Caratateua and Mosqueiro.

When you arrive in Belem, tourist information can be obtained at the Paratur tourism agency, which is located on the Praca Waldemar Henrique, close to the waterfront, the African Bar and the recently renovated Estacao das Docas (Station of the Docks). Other good sources of information include the Amazon Star Tourism office on the Rua Henrique Gurjao, and Turvicam on the Avenida Presidente Vargas, where flight tickets are sold.

When it comes to sightseeing in Belem, there are certainly plenty of choices. Many tourists choose to take a cruise up the Amazon River, enjoying the plentiful wildlife on the river banks. Others like to take in a show at the Teatro da Paz (Peace Theatre), go shopping at the eye-catching Mercado Ver-o-Peso, or simply enjoy a stroll along the waterfront of the docks. Families should certainly note the Parque Zoobotanico (Zoological Park and Gardens) and its native Amazonian animals, while the Bosque Municipal Rodrigues Alves (Rodrigues Alves Woodland) offers a pleasant place to spend a day and also features a zoo, together with botanical gardens, caves, lakes and some attractive waterfalls. Rather smaller and located within Belem's Cidade Velha district, the landscaping at the Mangal das Garcas (Mangrove of Herons Garden) is rather contemporary and stylish. More information about Belem Tourist Attractions.

Belem is a city with much character and this is in no small part down to its wealth of charming historical buildings, which include palaces, churches and fortresses. Standing on the Praca Frei Brandao, the Forte do Presépio is one of the oldest and dates back to the early part of the 17th century, being built to defend the city against the Dutch and French. Rather more opulent is the Palacio Antonio Lemos and the Palacio Lauro Sodré, with both of these grand palaces being sited on the Praca Dom Pedro II and each featuring their own museum. Just a stroll away and rather dominating the Praca Frei Brandao with its majestic architecture is the twin-towered 18th-century Catedral da Sé (Belem Cathedral), where its imposing facade features a successful mixture of baroque and neoclassical styles. More information about Belem Landmarks and Monuments.

Showcasing Pará history, local artefacts and Brazilian art, the museums and galleries of Belem cover a host of different subject matters and local information. Religious art is on display at the Museu de Arte Sacra (Museum of the Sacred Art), which is located within the Igreja do Santo Alexandre (Church of St. Alexander) and the adjoining Palacio Episcopal (Bishop's Palace), and includes some striking contemporary canvasses. Within the Parque Zoobotanico, the Museu Paraense Emilio Goeldi (Emilio Goeldi Museum) was established around 150 years ago and houses a variety of pottery pieces created by the native Marajó Indians. Many tourists choose to come to the Palacio Antonio Lemos, solely to check out its Museu de Arte de Belem (Art Museum), where more than 1,000 different paintings and other art works are exhibited. At the Palacio Lauro Sodré, the Museu do Estado do Pará (Pará State Museum) also deserves a mention. More information about Belem Museums.

From Belem, many wonderful excursions are possible. Tourists regularly choose to take an overnight journey to the enticing coastal destinations of Algodoal and the Ilha de Marajo (Marajo Island), while others like to take a day trip to the plentiful freshwater beaches on the neighbouring Ilha do Mosqueiro (Mosqueiro Island). A further selection of beaches can be found at the Ilha do Mosqueiro (Mosqueiro Island), although do bear in mind that the main beaches of Praia do Farol and Praia do Paraiso can become a little on the crowded side at peak times. Various island tours and canoeing trips are available, as are hiking trails to the Lago da Princesa and air-conditioned bus trips throughout the Greater Belem area. More information about Belem Attractions Nearby. 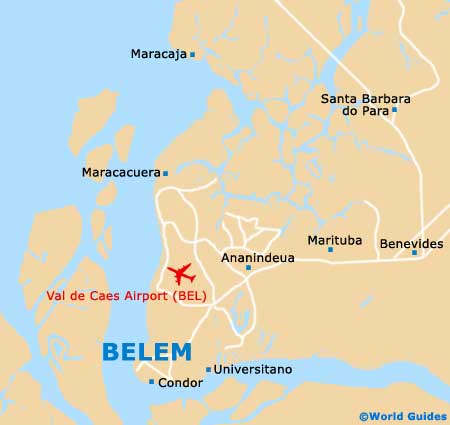