The Republic of the Philippines is an appealing archipelagic country and is situated in South-East Asia. Comprising more than 7,100 individual islands, the Philippines lies within the western region of the Pacific Ocean, where it is near to countries such as China (Taiwan), Indonesia, Malaysia, Palau and also Vietnam.

An expansive country, the Philippines boasts a population of some 90 million people and is actually the 12th most densely populated country on the planet. The climate of the Philippines is tropical, being at its hottest between March and May, and coolest from December to February, with the rainy season falling between June and November.


The islands of the Philippines are especially beautiful and mountainous, with a volcanic past and a number of remaining active volcanoes, such as those of Mayon, Pinatuba and Taal. Manila is the national capital and the Metropolitan Manila area incorporates a number of different cities. Other interesting Filipino destinations include Angeles, Bacolod, Bagui, Cagayan de Oro, Cebu, Davao and Tagbilaran City. Panglao Island is famed throughout the Philippines for its white sandy beaches and exceptional dive sites, while Vigan is an appealing and historic Spanish town, with an enviable World Heritage Site status.


Map of the Philippines 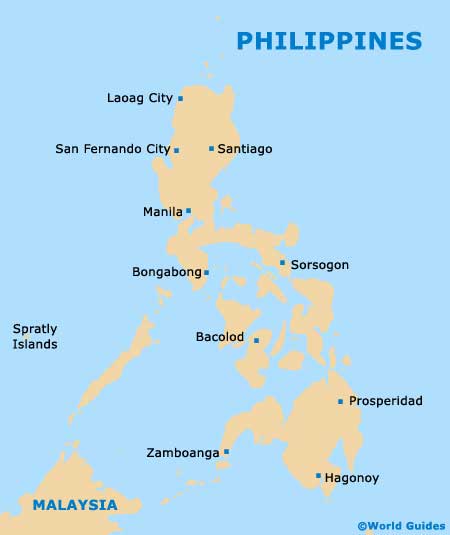