The extremely stylish and futuristic capital of Brazil, Brasilia is a youthful and affluent city founded as recently as 1960, with much contemporary architecture and a particularly imaginative layout. Brasilia really is a success story and a true feat of modern-day urban planning, which rather comes alive at night, when the most impressive buildings are uplit in a dramatic fashion.

Brasilia and its surrounding region combines to become the Distrito Federal (DF), occupying a chunk of the Central Plateau / Highlands, known as the Planalto Central. Here you will find much countryside and the huge artificial Lago do Paranoá (Paranoa Lake), while the overall area serves as a beautiful natural backdrop to the contrasting glitzy cityscape.

As one of the main host cities for the 2014 FIFA World Cup, the seat of Brazilian government and the home of some of Brazil's finest restaurants, Brasilia is an important city with a surprising amount of tourism opportunities and an enviable nightlife scene. When you arrive in Brasilia, you will find that the best source of local tourist information is available at the CTR Turismo tourism outlet at the Hotel Nacional, within the SHS Quadra 1. Further brochures and city information can be obtained from most decent hotels and travel agencies, as well as at Brasilia International Airport - President Juscelino Kubitschek, where the official CAT tourist office is well worth visiting.

City tours are a popular way to explore Brasilia and tour buses are especially notable, passing all of the main sights and providing multi-lingual commentary along the way. The Parque da Cidade Sarah Kubitschek (City Park) is one such attraction and presents an important central recreational space, frequented by many locals and tourists each day. On the northern side of the city, the Parque Nacional de Brasilia (National Park) is simply enormous and comes with much indigenous wildlife. Visitors to the city often head to the Praca dos Tres Podéres, where some striking buildings and museums reside, although if you enjoy a game of football, then it is quite likely that you will be drawn to the epic Estádio Nacional de Brasilia (National Stadium). More information about Brasilia Tourist Attractions.

The landmarks of Brasilia include some of the most famous and modern masterpieces in the whole of Brazil, with the most recognisable being the genius creations of legendary Brazilian architecture Oscar Niemeyer. These structures are certainly amongst Niemeyer's finest and one of the most obvious is the Catedral Metropolitana Nossa Senhora Aparecida (Metropolitan Cathedral), which is circular in shape and comprises a series of curved columns, reaching upwards to crown Brasilia's iconic cathedral. Niemeyer was also responsible for the Palacio da Justica (Palace / Department of Justice), as well as the rather futuristic-looking Congresso Nacional (National Congress) building, which features two tall vertical towers, flanked either side by two semi-spheres - appearing as if a dome had been sliced in half. Located close by and standing on the Eixo Monumental (Monumental Axis) is the Torre de TV (TV Tower), where an observation deck offers endless cityscape panoramas. More information about Brasilia Landmarks and Monuments.

Brasilia offers a reasonable selection of museums, which cover a variety of different topics, both local and national. The Museu de Valores (Museum of Money) contains an abundance of rare coins, old printing equipment and related information, together with a giant nugget of gold. The Complexo Cultural da Republica (Cultural Complex of the Republic) is where you will find the Museu Nacional (Brasilian National Museum) located - another breathtaking Niemeyer construction, while the prominent Juscelino Kubitschek Memorial also has some interesting exhibits. If you appreciate modern art, then the Museu de Arte de Brasilia (Brazilian Museum of Art) will be sure to please, being filled with art works of national importance. More information about Brasilia Museums and Brasilia Art Galleries.

Less than two hours' away from Brasilia are many further attractions, a number of which reside within the neighbouring state of Goias and suit tourists planning a day trip or two. Formerly the state capital of Goiás until the arrival of the planned city of Goiania in 1937, the historic city of Goiás Velho makes for a popular excursion and has become known for colonial character, being listed in 2001 as a UNESCO World Heritage Site. Directly to the north of Brasilia is the Chapada dos Veadeiros national park, offering innumerable hiking trails, gorges, scenic views and waterfalls. Many further dramatic waterfalls are within reach of Brasilia, the best of which include the Itiquira Falls (Cachoeira de Itiquira) and a number around the Chapada Imperial Park, Santo Antonio do Descoberto and the town of Pirenópolis. More information about Brasilia Attractions Nearby. 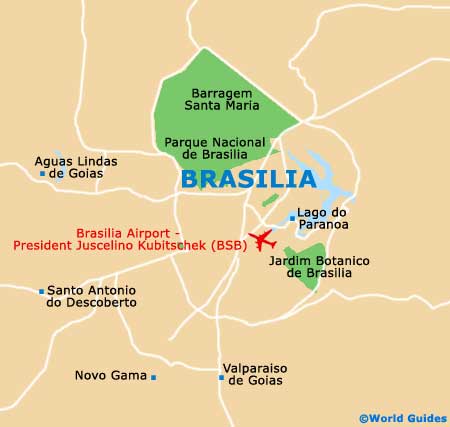