Capital of the Brazilian state of Pernambuco, the large and popular coastal city of Recife has gained much popularity in recent years, becoming a thriving destination for tourism. The beautiful beaches of Recife have certainly helped the city draw the summer holiday tourists, while the exciting February carnival season reliably brings huge numbers of visitors each year.

Recife is a typical urban city, with modern high-rise buildings, frequent traffic problems and endless suburbs. This is a large and busy city, and so you will need to plan your time carefully, allowing enough time to get around and explore. The nearby city of Olinda enjoys a close association with Recife and many holiday makers now choose to base themselves here, due to its proximity and plentiful accommodation.

Various tourist information centres are present in the city, being found within the oceanfront district of Recife Antigo, the Boa Viagem suburb and within the unusual Casa da Cultura shopping centre, which actually occupies a historic colonial prison building.

Accompanying the generous supply of beaches are many quality attractions for tourists to enjoy. The architecture of Recife tends to be at its most impressive around its public plaza, with the Praca da Republica (Republic Square) being bounded by some truly beautiful period architecture. The colonial buildings surrounding the Patio de Sao Pedro (St. Peter's Square) are equally impressive and this spacious plaza plays an important part each year when it comes to the city's exuberant carnival festivities. Families will enjoy spending an afternoon at the Parque Dois Irmaos (Zoo Botanical Park Dois Irmaos), where you can learn about the native animals of Brazil. On a sunny day, the water slides and giant wave pool at the Veneza Parque Aquático (Venice Water Park) are likely to beckon, being situated roughly 20 minutes to the north of Recife. If you are a soccer fan, then you may be lucky enough to catch a game at the city's giant Arena Cidade da Copa (Arena Stadium). More information about Recife Tourist Attractions.

The winding streets found within the characterful Recife Antigo (Old Recife) district are also home to some enchanting buildings and landmarks. Standing on the Praca Rio Branco is the waterfront Marco Polo Monument, which is one such structure and is said to mark the very spot where the Portuguese established the city in the early part of the 16th century. Close by is the Rua Bom Jesus - home of the striking Synagoga Kahal Zur Israel w Recife (Kahal Zur Israel Synagogue). To the south, the Paco Alfandega is an attractive customs house dating from the 19th century, which now functions as a modern shopping complex. For an insight into the city's past involvement with science and technology, head to the former observatory named the Centro Cultural Torre Malakoff (Malakoff Tower Cultural Centre), which has become a much-photographed site. Also rather imposing is the Capela Dourada (Golden Chapel) on the Rua do Imperador, where the interior decor is nothing short of extravagant. More information about Recife Landmarks and Monuments.

Between Recife and the adjacent city of Olinda are many enticing museums and similar cultural attractions, offering information about the history of Pernambuco and its past settlements. In Recife, the main museums include the Museu Militar Forte do Brum and its rich military collections, and the Museu do Homem do Nordeste, where displays relate to African, Indian and Portuguese communities. At the Museu da Cidade (City Museum), regional Dutch history is explored and local relics exhibited. The Museu de Ciencias Naturais (Natural Sciences Museum) is especially popular, thanks partly to its prime situation within the busy Parque Dois Irmaos. When it comes to art appreciation in the city, the Museu do Estado de Pernambuco (Museum of Pernambuco State) is a very noteworthy gallery, while the works of renowned Brazilian artist Francisco Brennand also feature heavily at other galleries. More information about Recife Museums and Recife Art Galleries.

The region surrounding Recife features plenty of day trip possibilities, meaning that tourists often choose to leave time for some excursions. Many choose to pay a visit to the sumptuous beaches of nearby Cabo de Santo Agostinho, where both snorkelling and scuba diving is popular. The neighbouring cities of Igarassu and Jaboatao dos Guararapes are also known for their sandy beaches and coastline, with the latter being located near to the Reserva Ecologica Mata de Mussaiba. Just a short drive to the north of Recife is the city of Paulista , where the Praia da Conceicao (Conceicao Beach) stretches for around 2 km / 1.5 miles. If you fancy hopping over to a nearby island for the day, then the Ilha de Itamaraca should be considered, coming with an interesting Dutch fortress, endless beaches, coconut trees, coral reefs and remnants of the Atlantic Forest. More information about Recife Attractions Nearby. 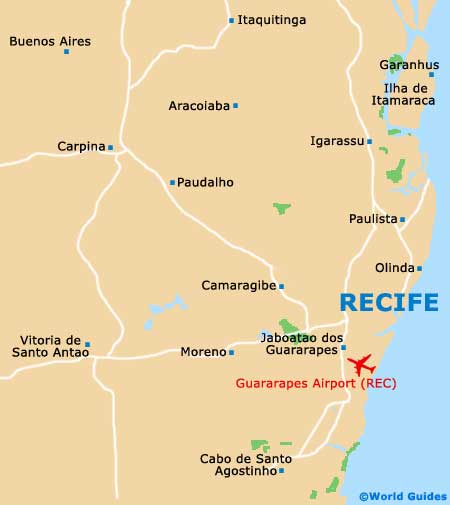