The inhabitants of Rio Grande do Sul take their traditions very seriously. It is still possible to see maté-drinking gauchos roaming the grassy pampas, dressed in baggy trousers and very large hats. Gaucho-style music is still popular, too. Look carefully and there is also a hint of European influence about the place, from its vineyards and castles to its gastronomy and architecture.

Nowhere can that European influence be seen more clearly than on the Rota Romantica, a route which passes through the mountains of Serra Gaucha. Germanic-style buildings dominate in places such as Gramado, which is more like an Alpine village than a Brazilian town.

From the Vale dos Vinhedos come some of the best respected wines in Brazil. The vineyards in this valley were originally created by Italian immigrants in the late 19th century and are still going strong today. Caxias do Sul, the second-largest city in Rio Grande do Sul, hosts a biannual festival which celebrates all things to do with viticulture. Also in the southern part of the state is Bento Goncalves, perhaps better known as Brazil's wine capital.

No trip to Rio Grande do Sul would be complete without a visit to its famous pampas. The capital of Porto Alegre is the perfect place to see gaucho proud traditions and culture in action, with the old cowboy way of life being carefully preserved here despite a growing cosmopolitanism. The city is dominated by the Lagoa dos Patos lagoon, which helps to make it one of the greenest capital cities in Brazil.

Porto Alegre's museums are a great place to get to grips with the rich paleontological history of Rio Grande do Sol. However, it is worth following up with a trip to an actual fossil site. They are, after all, in plentiful supply in these parts, particularly in the central part of the state where dinosaurs roamed during the Triassic period. Running through the area is the BR-287, better known as the Highway of Dinosaurs. 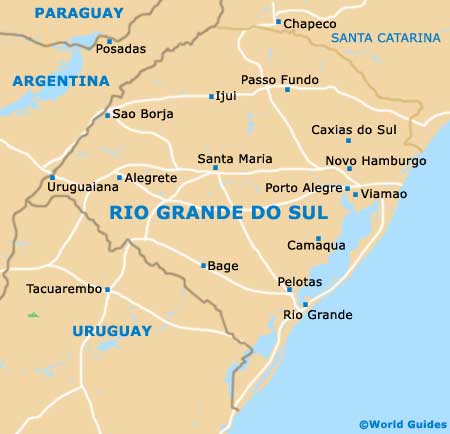