Sited within North Africa, the Kingdom of Morocco lies on the westerly coastline, next to the Mediterranean Sea and also the Atlantic Ocean. To the east, Morocco is bordered by Algeria, while Mauritania is to be found to the south, and both Gibraltar and Spain to the north, across the Strait of Gibraltar.

Morocco has been inhabited for more than 10,000 years and remains have been found dating as far back as Neolithic times. The Morocco of today has seen undeniable influences from Europe and has enjoyed political independence since 1956.


The month of Ramadan is a major event within Morocco and each year Muslims choose to completely fast by day, and then feast after the setting of the sun. Tourists will be able to eat during the day at some restaurants during Ramadan, although by night, the traditional Moroccan celebrations are quite unmissable.

Mediterranean Morocco is located on the northern side of the country and is of great interest to tourists, being home to popular destinations such as Ceuta, Chefchaouen, Melilla, Tangier and Tetouan. The region known as the North Atlantic Coast is to the south-west of Mediterranean Morocco and where you will find the capital of Rabat, along with the famous city of Casablanca. Also of note are Fez and Meknes within the area known as Middle Atlas, Marrakech in High Atlas, and Ouarzazate in Saharan Morocco, which is generally thought to be the 'Capital of the South'.

When it comes to Morocco hotels, you will find that most medinas (quarters) in the larger cities contain a selection of cheap hotels, although facilities can be basic. For more money and comfort, mid-range lodging is generally the safest choice, with old citadels (kasbahs) often functioning as characterful Moroccan hotels. In Marrakech, tourists frequently choose to stay in traditional town houses (riads), for the ultimate holiday experience. 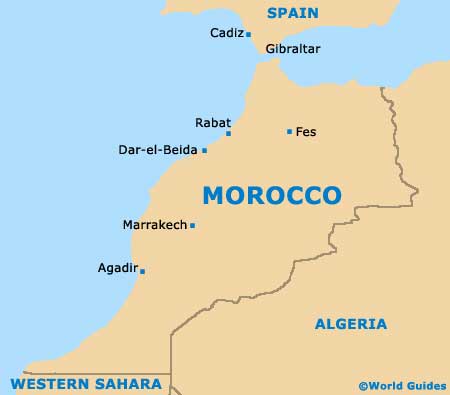