The state of Minas Gerais might be geographically close to the cities of Rio de Janeiro and Sao Paulo, but they are worlds apart. This southern Brazilian state is packed full both of historic buildings and forward-thinking modernism. Its landscape offers a rich helping of the natural world and its careful preservation. Cultural delights aren't exactly lacking, either.

Minas Gerais has enough authentic colonial towns to make you wish that you'd planned a longer visit, including one to the picturesque Ouro Preto, once the capital of Brazil. The cobbled streets of Tiradentes are perfect for ambling around, admiring the sheer beauty of the place and its local artisan scene. Hop from there to Sao Joao del Rei by steam train to get into the vintage spirit of the place.

The state capital of Belo Horizonte is often ignored in favour of more historic attractions. Built at the end of the 19th century as Brazil's very first venture into urban planning, it continues to look forward rather than back. Focus on its enthusiasm for innovation and it is easier to see that the city has a certain charm, with its lively market, concert culture and up-to-the-minute art gallery.

Away from the city heat, it is possible to enjoy a taste of nature in one of the national parks in Minas Gerais. The Parque Nacional Caparaó, just a short drive from Belo Horizonte, is famous for its abundance of waterfalls. Climb to the top of Pico de Bandeira, Brazil's third-highest mountain, for a peek at all that panoramic splendour.

Aspiring rancheros might like to take the trail westward to Uberaba, better known as the beef capital of Brazil. It is here that the largest exhibition of zebu cattle takes place in May every year. 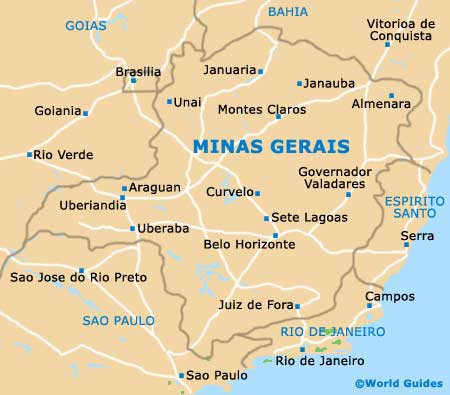