Vienna is the capital of Austria and this vibrant city is famous for its waltz and 'Wiener schnitzel'. St. Stephen's Cathedral (Stephansdom) lies in the very heart of Vienna's old city, the Innere Stadt. The Austrian Parliament Building is also located in Vienna, along with the Hofburg (Imperial Palace) and the Prater Amusement Park.


Salzburg may not be Austria's number two city in terms of size, but it is certainly not far behind Vienna in terms of popularity and tourism. The birthplace of Mozart, Salzburg was catapulted ever further the limelight after appearing extensively in the hit movie musical 'The Sound of Music', and continues to enjoy the endless interest that this film has created.

Come the winter months, skiers flock to Austria and take to the pistes. The Alps and Tuxer mountains around Innsbruck are home to some of the very best winter resorts in Austria, where you can ski, snowboard, toboggan and even enjoy the thrills of bob sledding. In the summer, these resorts are transformed once more and lend themselves to Alpine hiking and general open-air recreation. 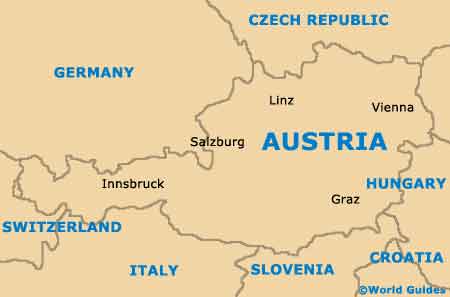