Situated right next to the scenic freshwater lagoon named the Lagoa dos Patos, Porto Alegre remains an important southerly port city with an undeniable sophistication. Downtown Porto Alegre has been well-planned and maintained, with appealing neoclassical architecture and a good public transport network.

Central Porto Alegre is focused around the Mercado Publico (Public Market), with both a metro and bus station being conveniently located close by. To the east, Moinhos de Vento is an enticing neighbourhood for tourists, being known for its shopping scene and vibrant nightlife. To the south, the Praia de Belas city park stands alongside the lakefront, while more central and situated next to the river named the Rio Guaiba (or Baia de Guaiba) are a series of popular sandy beaches

Tourism has become an important part of the local economy in Porto Alegre. City tourist information offices are available both at Salgado Filho International Airport and inside the main entrance to the busy Mercado Publico.

Away from the beachfront of Porto Alegre are many further tourist attractions, providing a good alternative to the sun, sea and sand. Sightseers may like to jump aboard the popular Linha Turismo (Tourist Bus Line), where insightful commentary provides an overview of the city and its main places of interest. For some lush tropical foliage, the Jardim Botanico (Botanical Gardens) contrasts greatly with the nearby sandy beaches and features a large lake, native plants and an interconnecting series of pathways. The Parque Farroupilha (Farroupilha Park) provides another important recreational space and comes with a boating lake, oriental gardens, a small zoo and a grand iron fountain that once served as the centrepiece for the Praca XV de Novembro. Next to the park, the Brique da Redencao is a traditional market staged each Sunday along the entire length of the Avenida Jose Bonifacio. After hours in Porto Alegre, the nightlife around the Parque Farroupilha is amongst the city's best, with a plethora of restaurants, bars and nightclubs being located close by. The Universidade Federal do Rio Grande do Sul (Federal University of Rio Grande do Sul) is also known for its nightlife opportunities. More information about Porto Alegre Tourist Attractions.

Porto Alegre is a city with much character and many of its most interesting and attractive buildings surround the Praca da Matriz, such as the imposing Catedral Metropolitana (Metropolitan Cathedral), as well as both the Teatro Sao Pedro (St. Peter's Theatre) and the Biblioteca Publico (Public Library). Also of note in Porto Alegre is the cultural centre known as the Memorial do Rio Grande do Sul (Rio Grande do Sul Memorial), which stands on the Praca da Alfandega and houses many important local relics. Commemorating the official founding of the city in 1742, the Monumento aos Acorianos (Azorean Monument) is to be found on the Praca dos Acorianos and is a contemporary sculpture resembling a galleon, honouring the small group of Azorean people who settled here all those years ago and first shaped the city. More information about Porto Alegre Landmarks and Monuments.

There is much culture present in the Porto Alegre of today, coming in the form of various museums and similar attractions. The Museu Historico Júlio de Castilhos (Júlio de Castilhos Museum) contains many important relics collected and excavated from throughout Rio Grande do Sul. At the extremely impressive Museu de Ciencias e Tecnologia da PUCRS (Museum of Science and Technology), families will enjoy interacting with the exhibits relating to biology and physics, and learning information about the solar system at the planetarium. If you are a lover of art holidaying in Porto Alegre, then you are certainly in for a treat. The city is home to the state's principal art gallery / institution, the Museu de Arte do Rio Grande do Sul (Rio Grande do Sul Museum of Art), which is managed by the Secretaria de Estado da Cultura (Ministry of Culture). Here you will find an enormous array of paintings and sculptures, by both Brazilian and international artists. However, the gallery's fanciful architecture also draws the eye, appearing rather like a palace, with its grand Baroque and neoclassical details resulting in this splendid building being listed by the Institute of National Historical and Artistic Heritage (Institute of National Historical and Artistic Heritage). More information about Porto Alegre Museums and Porto Alegre Art Galleries.

In general, the most popular and notable beaches tend to be approximately a one-hour drive from Porto Alegre and therefore ideal for impromptu day trips. The coastline of Rio Grande do Sul is extremely beautiful, although it is well worth noting that some of the prettiest beaches can be a little isolated and difficult to reach, meaning that it often makes sense to hire a 4WD vehicle. Around two hours to the north-east is the Parque Nacional de Aparados da Serra (Aparados da Serra National Park) , where nature trails lead you past wildlife and cascading waterfalls. Directly north of Porto Alegre is the vibrant city of Canoas - home of the acclaimed Universidade Luterana do Brasil - ULBRA (Lutheran University of Brazil). Head further north and you will soon encounter Novo Hamburgo, a charming city located on the tourism trail named the Rota Romantica (Romantic Route). Other nearby attractions include the vineyards of Bento Goncalves, the Gothic-style cathedral of Canela, the Alpine scenery of Gramado, the rich German culture of Sao Leopoldo, and the city of Viamao, where highlights include the Parque Saint Hilaire and the Taruma Racecourse. More information about Porto Alegre Attractions Nearby. 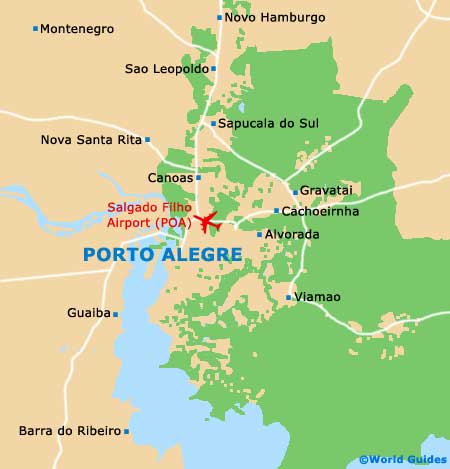