Officially named the Commonwealth of the Bahamas, this nation is to be found within the North Atlantic Ocean and comprises some 29 islands, along with more than 600 cays and over 2,000 islets. Cuba, the Dominican Republic and Haiti all lie to the south, and the Turks and Caicos Islands are to the south-east.

South-eastern USA is also relatively nearby the Bahamas, with the state of Florida being to the north-west, where the coastal cities of Fort Lauderdale and Miami are amongst the closest.


The history of the Bahamas began with the original Lucayan people, who lived here quite peacefully until famous explorer Christopher Columbus arrived in the New World during the early 1490s. After these natives were enslaved and shipped to Hispaniola, the islands remained completely uninhabited for over a century. The middle of the 1600s saw the founding of the Modern Bahamas, and soon after, selected coastal pockets became strongholds for pirates, with Nassau serving as the pirate capital and regularly frequented by the infamous Blackbeard.

Today, the Bahamas is more about beach resorts and tourism. Andos is the largest island by far, while New Providence is the most significant island, being called home by the national capital of Nassau and next to Paradise Island. Others include the islands of Abaco, Acklins, Biminis, Eleuthera, Exumas, Grand Bahama, Inaguas, Mayaguana and San Salvador. 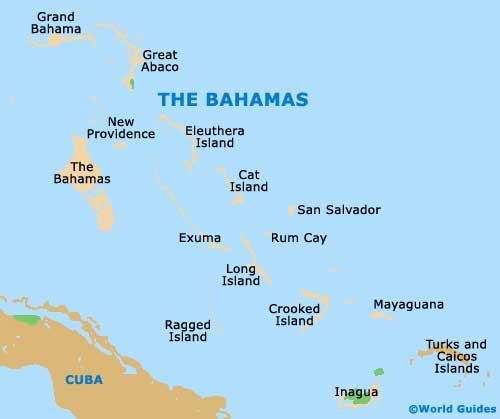