Buzios is a truly beautiful Brazilian coastal resort and resides on a peninsula surrounded by many golden sandy beaches. Until the 1960s, Buzios was nothing more than a quiet fishing village, and at that time, Brigitte Bardot discovered the town and soon brought it to the attention of the world.

The natural setting, beaches, nightlife, shops, restaurants and water sports all contribute to local tourism in Buzios, with numerous popular places of interest lining the cobblestones of the Rua das Pedras and the connected Orla Bardot. Much of the early Mediterranean character brought over by the Portuguese many years ago is still present today and adds to the overall charm. Tourist information, maps and hotel details are available at the centrally located offices of the Secretaria de Turismo, while various local tour operators provide popular trips to outlying beaches and islands.

The beaches of Buzios attract large numbers of tourists each year, with the biggest and busiest being well supported by a good choice of amenities. In general the beaches located to the south of the town tend to be the most attractive, although remain fairly quiet, since they are not the easiest to reach. Instead, tourists generally favour the more northerly beaches, which are usually more accessible, sheltered and certainly busier. The most noteworthy beaches around Buzios include Azeda, Ferradura, Ferradurinha, Foca, Forno, Geriba, Manguinhos and Olho de Boi, the latter of which is regularly frequented by nudists. More information about Buzios Beaches

Much of the appeal with Buzios lies around its beaches and coastline, where an abundance of water sports and outdoor activities awaits tourists. Scuba diving and snorkelling are both popular here and with certified dive schools to hand, it doesn't matter if you are a complete novice. A selection of surfing schools also reside in Buzios, with most being based around the Praia de Geriba (Geriba Beach), where strong waves tend to be especially reliable. If water sports are not really your thing and you are looking for an alternative to sunbathing on the beach, consider taking a boat trip or schooner tour to one of the outlying islands close by, such as the Ilha Branca, the Ilhas Gravatá or the Ilha da Ancora. There are also several nature reserves situated along the coastline, between the town and the nearby resort of Cabo Frio. More information about Buzios Tourist Attractions.

Buzios is located on the easterly coast of Rio de Janeiro state and surrounding the town are many possible excursions. More than 20 additional beaches are just a short drive away and perfect for a day trip, with the characterful town of Saquarema being located just over an hour to the south-west and known not only for its beaches and surfing contests, but also for its hilltop church - the Igreja de Nossa Senhora da Nazaré. Directly to the south of Buzios is the resort town of Arraial do Cabo, where the white sandy beachfront of the Praia dos Anjos enjoys a scenic backdrop made up of rolling hills. Arraial do Cabo is a sunny town based around its busy fishing port - the Porto do Forno, and is a good spot to observe the seasonal migration of passing humpback whales.

The relaxed beach town of Cabo Frio is also particularly close by and is surrounded by sand dunes and a sweeping coastline. Standing on the eastern side of Cabo Frio's Praia do Forte is the extremely historic Forte Sao Mateus, which once protected the town against marauding pirates and dates back some 400 years. More information about Buzios Attractions Nearby. 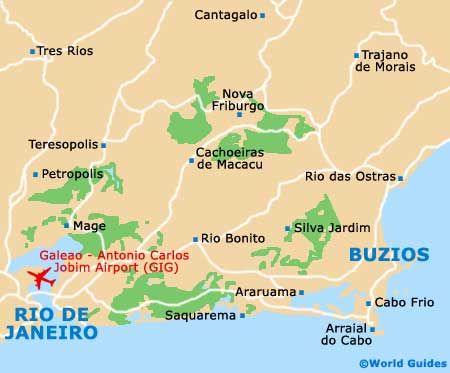