The warm turquoise-green waters of the Ceará coastline are one of the main reasons that tourists flock to this Brazilian state. A warm climate also helps to make this north Brazilian state a truly tropical paradise.

Ceará's main city, Fortaleza, is one of the largest in Brazil. It is also a magnet for tourists who come here to enjoy its renowned party lifestyle and plentiful supply of city beaches. In fact, most tourists probably don't venture far from the sea during their stay. The Beira Mar is certainly one of the most pleasant parts of the city. Venture from the delights of the beachfront and you will discover the bustling Praca do Ferreira, Fortaleza's main square, as well as the calm pathways of the city's greenest area, the Parque Ecologico do Cocó.

Once you've exhausted the possibilities offered by Ceará's main city, it is worth exploring other exotic locations in this north Brazilian state, most of which can be found along the mangrove-lined coast. A short distance from Fortaleza, the picturesque fishing village of Cumbuco enjoys near-perfect conditions for such water sports as kitesurfing and windsurfing. Further afield, the sun shines on the seaside resort of Canoa Quebrada pretty much all the year round.

Inland, the Brazilian Highlands offer spectacular scenery for tourists to enjoy, although it is hard to ignore the fact that this isn't one of Brazil's most prosperous areas, to say the least.

Ecotourism opportunities are plentiful here, from the beauty of Ceará's Highland plateaus, such as the Chapada do Araripe, to its dramatic waterfalls. The town of Quixadá has also become a hotspot for paragliders, who come here not just to enjoy the fantastic panoramic views whilst airborne, but also to break world records. Keen paleontologists should head to Santana do Cariri, a city that has become linked with dinosaur discoveries in recent years. 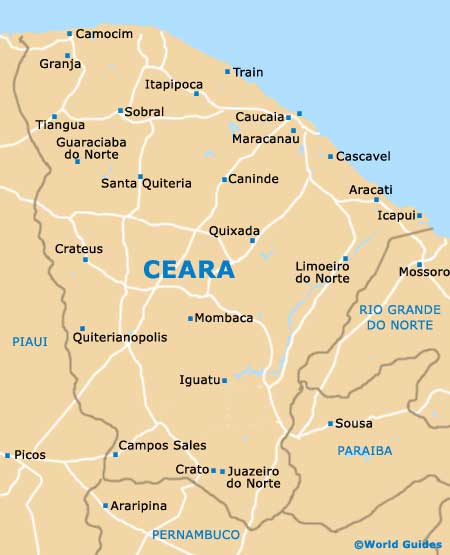