The Republic of Cyprus is a large island country in Euroasia and is to be found within the eastern Mediterranean region. Cyprus is a European country and lies directly to the south of Turkey, with Levant being to the east, Greece to the west and Egypt to the south.

Cyprus is actually the third-biggest of all the islands within the Mediterranean Sea, after only Sardinia and Sicily, and is particularly close to the Middle East. The island is roughly divided into a number of prominent districts, including Famagusta, Larnaca, Limassol, Nicosia and Paphos. All of these destinations have become popular spots for Cyprus holidays, although it is those closest to the beaches that remain the biggest tourist magnets, with the most popular choices being Ayia Napa, Larnaca, Limassol and Paphos, while the quieter waterfront villages of Kouklia and Pissouri offer a very pleasant alternative.


For many, Cyprus is the birthplace of famous Greeks gods, such as Adonis and Aphrodite, and offers a number of spectacular archaeological remains, some of which date back more than 10,000 years. Early-Neolithic sites are located within Kastros, Khirokitia and Shillourokambos. Also of note is the Temple to Apollon Ilatis, which is close to Limassol, and the ancient city of Salamis, situated on the eastern shore of Cyprus and to the north of Famagusta.

Nicosia serves as the capital of Cyprus and enjoys a fairly central location on the island, where it is also the largest city, by far. Larnaca is another prominent city and the oldest on the island, with many beachfront hotels and attractions, while both Limassol and Paphos are also significant tourist destinations, offering plenty in the way of water sports, dining and shopping. However, for Cyprus holidays and nightlife, the party town of Ayia Napa is almost legendary, as are its Mediterranean beaches.

Since this a large and sprawling island, many holidaymakers favour car hire in Cyprus over public transport, as it allows them to easily hop between the many coastal resorts and beaches at their own pace. Most rental cars come with air conditioning as standard, which is something of a necessity during the hot Cypriot summer months. 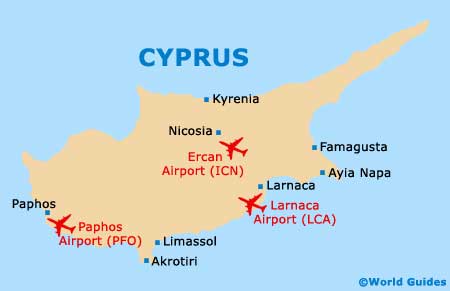