We all have a vision of Rio de Janeiro the city, with its iconic statue of Christ the Redeemer overlooking the busy streets below. Not many of us know that Rio is also a state that is home to an impressive array of sun-soaked tropical beaches, national parks, virgin rainforests and tourist hotspots.

Few visitors to Rio de Janeiro - otherwise known as the 'Cidade Maravilhosa', can fail to be intoxicated by the heady and carefree atmosphere of samba music, dance halls and general 'joie de vivre' that seeps out of the city's buildings. When you've tired of all the action, there is plenty of scope for people-watching on the famous Copacabana beach, or even Ipanema - both of them immortalised in song. Christ the Redeemer is but a train ride away from the city centre, amidst the National Forest. Come evening, it is back to Rio's meza bars and samba clubs for some serious hip shaking.

Head out of the city and take a south-easterly direction, and you will come across a paradise of clear-watered lagoons and sandy dunes. It is as perfect a hangout for surfing dudes as it is for those who prefer to swim and snorkel. To the north of Rio de Janeiro, you will need to grab climbing gear and hiking boats to enjoy the rugged Alpine-like landscape of the Parque Nacional da Serra dos Orgaos.

Head west from Rio and eventually you will reach the Costa Verde, which as its name suggests, is a mass of greenery, from its verdant forests to its technicoloured floral life. Also of interest, the Parque Nacional do Itatiaia offers a taste of rustic harmony, with its gurgling streams and prime fishing opportunities. 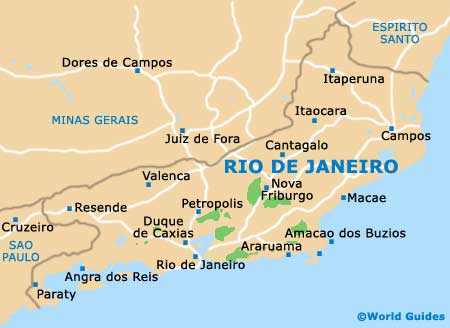