A member of Scandinavia and the smallest country within the Nordic region, Denmark is a maritime nation and lies directly north of Germany and to the west of Sweden. The Jutland Peninsula is the only actual region of Denmark connected to mainland Europe, with the rest of the country comprising around 400 different islands.

Denmark first came to prominence more than 1,000 years ago, when the Danish Vikings ruled the land. Today, this country is home to an appealing mixture of vibrant cities and verdant countryside. No single part of Denmark is ever more than one hour away from the coastline, where many popular white-sandy beach resorts have emerged in recent years.


The lively capital of Denmark is Copenhagen, the biggest and most cosmopolitan city in the whole in Scandinavia. Copenhagen is truly the jewel in the Danish crown and contains a host of cultural attractions and world-class museums, being within easy reach of one of Europe's leading rock festivals in nearby Roskilde. Other popular tourist destinations in Denmark are to be found along the Oresund Coast in North Zealand, and throughout Southern Zealand, Central Jutand, Bornholm, Funen and Lolland. 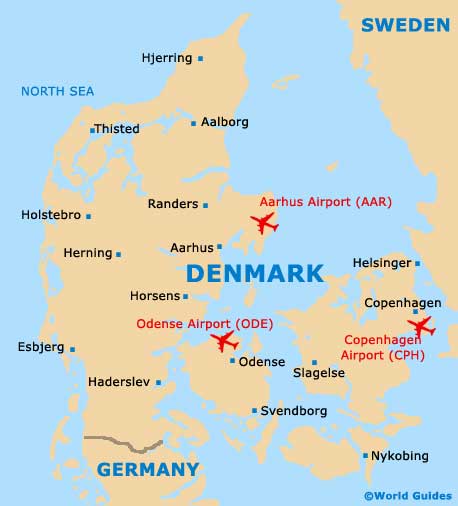