Affectionately known as Floripa, the city of Florianopolis is an appealing coastal destination and one of the largest coastal resorts in southern Brazil. Florianopolis mainly resides on the island of Santa Catarina, although a small section of the city occupies the mainland districts of Coqueiros and Estreito. The island zone holds the greatest tourism appeal, particularly around its historical centre and the rather upmarket neighbourhood of Beira Mar Norte.

The coastline of Santa Catarina stretches for more than 170 km / 107 miles and boasts a total of 42 individual beaches, all of which are no more than an hour's drive away from Florianopolis. However, as well as the city's glorious beaches, tourists can expect huge sand dunes, rolling hills, towering cliffs, cascading waterfalls and two large lakes, together with characterful cobblestone streets and colonial architecture around the gleaming Praca XV de Novembro. Just a matter of minutes away, tourist information is available at the Convention and Visitors Centre on the Rua Jeronimo Coelho, which is based next to the Cachacaria da Ilha.

Tourists will agree that much of the appeal with Florianopolis is its island setting and subsequent coastline, and many popular attractions are never far away from the beaches. Water sports such as scuba diving, windsurfing, kitesurfing and kayaking are all available, while the nearby fishing village of Barra da Lagoa is famed for its exceptional surfing, as well as the beaches of Joaquina, Mocambique and Mole. During the Brazilian winter, whale watching from the shore becomes possible, when groups of Southern Right whales pass close by as they migrate to warmer waters. Centrally located on Santa Catarina, the Lagoa da Conceicao (Conception Lake) offers sailing and water skiing, along with many further surrounding recreational activities. Also on Florianopolis is the Agua Show Park, where a multitude of water slides and swimming pools provide an enjoyable way to spend an entire day. As the sunsets, get ready to join in the buzzing nightlife, as crowds head to the bars and restaurants, particularly around the Praia dos Ingleses (English Beach) and the Lagoa da Conceicao. Alternatively, you may well like to take in a show at either the Teatro Alvaro de Carvalho or the Teatro Ademir Rosa theatres. More information about Florianopolis Tourist Attractions.

Settled by the Portuguese in 1673 and officially founded in 1726, Florianopolis is a city of much history and contains a number of extremely old buildings, dating from the 18th century onwards. Presiding over the spacious Praca XV de Novembro is the Catedral Metropolitana (Metropolitan Cathedral), which stands on the site of a much earlier 17th century chapel and adds considerable character to this part of the city, contrasting greatly with the modern high-rise buildings close by. The Igreja de Nossa Senhora do Rosário (Church of Our Lady of the Rosary) is another important religious landmark in Florianopolis and boasts some exceptional cityscape panoramas. Several fortresses punctuate the coastline, being built more than 250 years ago to defend the city from the Spanish. Rather more modern and iconic is the Ponte Hercilio Luz (Hercilio Luz Bridge), a huge suspension bridge currently closed to traffic due to safety issues. More information about Florianopolis Landmarks and Monuments.

The majority of the museums and similar cultural attractions on Santa Catarina are located away from the main beach resorts, residing around the centre of Florianopolis. Close to the cathedral, the Museu Historico de Santa Catarina (History Museum of Santa Catarina) was once the governor's palace and contains many important regional artefacts and information about the evolution of the island's inhabitants. Based at the Colégio Catarinense is the Museu do Homem do Sambaqui (Museum of the Sambaqui People) and its profusion of archaeological treasures. At the Universidade Federal de Santa Catarina (Universidade Federal de Santa Catarina), the Museu de Antropologia (Anthropology Museum) is where you will find some of the island's oldest artefacts, discovered during coastal excavations and including tools, pottery and skeletons of native Indians. More information about Florianopolis Museums.

Most tourists holidaying in Florianopolis choose to allocate some time to properly explore the Ilha de Santa Catarina (Santa Catarina Island). Tourism is ever-present on the northern side of the island, between the beaches of Ingleses and Jurere, where some popular seaside resorts and related beaches are based, such as Canasvieiras. To the west, the historical cobblestone streets and Azorean architecture of Santo Antonio de Lisboa provide something a little different, with a similar Portuguese heritage being present in the southerly village community of Ribeirao da Ilha, which is actually one of the biggest producers of oysters in the whole of Brazil.

Both Santo Antonio de Lisboa and Ribeirao da Ilha are especially historic and form the island's oldest districts, while on mainland Santa Catarina and just over two hours north of Florianopolis, the city of Joinville is the state's biggest and makes for a good excursion, particularly in July, when the Joinville Dance Festival draws literally thousands of dancers. Nearby Blumenau may also be of interest, with its annual Oktober beer festival being surprisingly the second-biggest in the world. More information about Florianopolis Attractions Nearby. 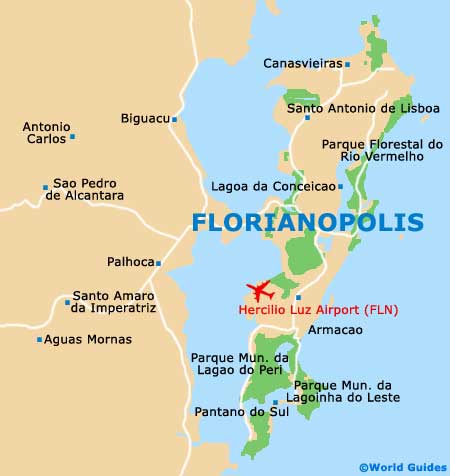