Visit Bahia's beautiful beaches and the city of Salvador, its cultural centre, and you may feel that you've done all there is to do. Actually, you will have barely scratched the surface of this massive Brazilian state. Bahia is full of possibilities that include visiting paradisiacal islands, areas of outstanding natural beauty and important historic sites.

That said, Salvador is as good a place to start as any for visitors to Bahia. One of the oldest cities in the Americas, its rich colonial past is still very much in evidence today in the form of some fine buildings, a mixture of Portuguese architecture with a passing hint of African influence. Salvador has also acquired a reputation for being the 'city of happiness', probably because of the great propensity of the city's locals to throw a good party. With one of the longest city coastlines in Brazil, there is also a high chance that you might be tempted to head for one of Salvador's beaches. Visitors can choose from calm and family friendly sea inlets, to open water beaches that are great if you are looking to catch the perfect wave.

Hop aboard a 'pequena' boat and you can cruise your way out of the city. Set sail for Itaparica, across the Baia de Todos os Santos, or take a peek at one of the bay's many other islands - there are 56 in all, including Ilha de Maré.

Bahia is home to exotically named stretches of coastline, from the blue lagoons and coconut groves of the Coconut Coast in the north of the state to the Whale Coast in the extreme south, with its plentiful opportunities to enjoy a spot of whale watching or scuba diving.

Between the north and south of Bahia run the Chapada Diamantina mountains, an area of Brazil that was once the home of many a diamond-hunter. Today, it is becoming just as popular with modern-day ecotourists. 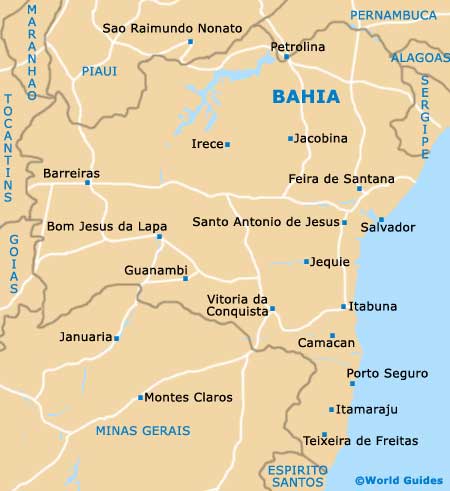