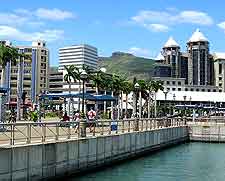 The Republic of Mauritius lies on the south-western side of the Indian Ocean, with the Seychelles being to the north-west and Madagascar (the fourth-largest island in existence) directly to the west, along with the African continent as a whole. As well as the main island of Mauritius, the nation also comprises the Agalega Islands, and the islands of both Cargados Carajos and Rodrigues.

Famous for once being home to the now extinct dodo bird, the multicultural island nation of Mauritius is renowned for its powdery beaches, appealing tourism resorts, azure-blue waters and tropical rainforests. However, away from the principal coastal resorts and in the capital of Port Louis you will find a contrasting hectic city life, complete with heavy traffic, modern shopping malls and urban development. It is in Port Louis where you will find the Mauritius Tourism Promotion Authority (MTPA), which is packed with tourist information and maps, and located on St. Louis Street - just a few blocks back from the bustling Caudan Waterfront (Le Caudan) and Victoria Square. 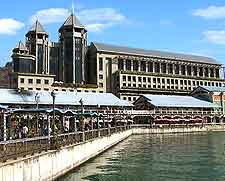 There is much to do around Mauritius, although the best attractions are usually based along its lengthy coastline. At Tamarin Bay you can find some excellent surfing waves or simply watch the breaching dolphins, while at the former fishing village of Flic en Flac, you can expect everything from a vast public beach lined with buzzing clubs and restaurants, to a nearby nature reserve (Casela) and a traditional sugar factory (Medine). 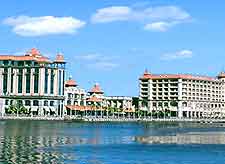 Families on holiday here will no doubt enjoy hanging out at the fun-packed Waterpark Leisure Village or exploring the relaxing paradise that is Grand Bay (Grand Baie), where the tropical beachfront is conveniently close to Port Louis. Other popular beaches include Belle Mare - next to Trou d'Eau Douce, Gris Gris in the southerly Souillac area, northerly Pereybere and Mont Choisy. For scuba diving, Colorado, Flic en Flac, Roches Zozo and Trou aux Biches have all become renowned dive hotspots, as have the nearby islands of Coin de Mire and Ile Plate. More information about Mauritius Beaches and Mauritius Scuba Diving.

Other enticing highlights around Mauritius include the Black River Gorges National Park, the Domaine du L'Etoile Nature Reserve, the Domaine du Chasseur Nature Reserve, the colonial plantations of Moka's Eureka Mansion, the busy markets at Mahebourg, and the Mauritian fauna at the Yemen Reserve. Sightseers often begin their Mauritian holiday in Port Louis, with its Royal Botanical Gardens of Pamplemousses being quite a sight to savour. Also in Port Louis is the historical Aapravasi Ghat (Immigration Depot), where literally hundreds of thousands of immigrants once registered their arrival. 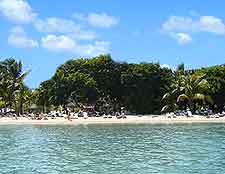 Apart from the beaches, families on holiday may like to pay a visit to the Mauritius Aquarium at Pointe aux Piments, the tortoise breeding centre at Senneville - La Vanille Reserve des Mascareignes, and the Casela Nature and Leisure Park in Cascavelle, where its fun safari jeep-rides have become something of a tourist magnet. Located on a neighbouring island is the Ile aux Aigrettes Nature Reserve, with its important population of highly endangered Mauritius Kestrels. More information about Mauritius Tourist Attractions and Mauritius National Parks. 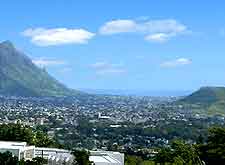 Spread all around Mauritius are many wonderful landmarks, with some of the most recognisable man-made sights including the citadel at Port Louis, which goes by the name of Fort Adelaide and dates from the 1830s. At Mahebourg, Vieux Grand Port holds an important place in Mauritian history, since it was here where Dutch sailors first arrived, roughly 400 years ago. At Baie aux Tortues, it is the Balaclava fortress ruins that attract the crowds of tourists, together with its tropical beaches and nearby Labourdonnais Orchards. 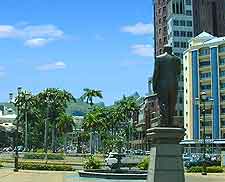 For something more natural, head up Signal Mountain and enjoy the spreading views of Port Louis, far below. Alternatively, Ile aux Cerfs (Deer Island) is worthy of an excursion, lying just off the easterly coastline, and Curepipe has become another major draw card, famed for its well-defined dormant volcanic crater known as Trou aux Cerfs or Murr's Volcano. Quite special and memorable are the Chamarel Dunes, where the vibrant different coloured earth / sand appears in bold rainbow stripes. More information about Mauritius Landmarks and Monuments. 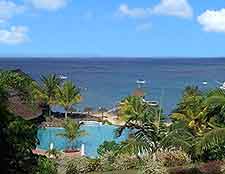 Those on holiday in Mauritius and looking for an alternative to the very plentiful beaches will find a series of museums and similar cultural offerings, with Port Louis being a good place to start your sightseeing. At the Mauritius Institute in Port Louis, the Natural History Museum (Desjardins) is a must-see attraction, with its wealth of information about the dodo bird, which lived here quite happily until colonisation saw its extinction by the 17th century.

Also in Port Louis is the Blue Penny Museum at the Caudan Waterfront and the Mauritius Postal Museum at the Place du Quai, where you can learn all about the island's rare one-penny and two-penny stamps - two of the most valuable stamps in the world. Further cultural attractions in Mauritius can be found at Beau Plan, Mahebourg and Souillac - home to the Frederik Hendrik and the Robert Edward Hart Memorial museums. More information about Mauritius Museums. 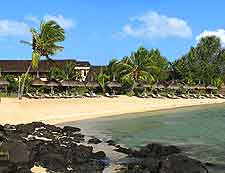 Mauritius is just under 2,500 km / 1,550 miles from mainland Africa, lying directly to the east of Mozambique and well-connected by plane. A number of islands are considerably closer, with the westerly French island of Réunion being the closest and reachable by regular ferries. A trip to 'nearby' Madagascar may well also appeal. Antananarivo functions as the Madagascan capital and boasts many intriguing attractions, such as its Queen's Palace (Rova). Just off the shore, both Nosy Be Island and the Ile Sainte Marie come with dreamy tropical beaches, snorkelling, scuba diving and many other water sports. Well connected by plane, the Seychelles is a great spot for a beach holiday, with island-hopping between Mahé, La Digue and Praslin coming recommended. More information about Mauritius Attractions Nearby.