A prominent Brazilian city located within the state of Paraná, Foz do Iguacu has become something of a tourist hotspot, due to its proximity to some exceptional coastal mountains, lush jungle forests and simply awesome tiered waterfalls, named the Iguacu Falls - a natural wonder. Comprising just short of 300 individual waterfalls, the Iguacu Falls are wider and taller than the Victoria Falls and the Niagara Falls respectively, and arguably far more impressive.

The boundary of the falls is shared between both Brazil and Argentina, with the views and attractions being quite different on each side and warranting a day or two for proper exploration. In Brazil, the Parque Nacional do Iguacu offers some breathtaking panoramas from a distance, while in Argentina, the Parque Nacional Iguazu boasts a closer, more intimate experience. Many tourists choose to join a boat trip from the dock next to the Isla San Martin, and admire the Iguacu Falls from an altogether different angle.

The regional Iguassu tourism board maintains a number of useful tourist information outlets in Foz do Iguacu, which are situated at the bus station (rodoviaria), Cataratas del Iguacu International Airport and on the Praca Getulio Vargas, next to the Praca Rio Branco and close to the Argentine Consulate.

The main sights and sounds in this part of Paraná tend to be based within the Parque Nacional do Iguacu or close by. Many tourists choose to take a walk along the Sendero Verde trail, or the Tren Ecologica de la Selva (Green Train of the Jungle), reaching the Estacion Cataratas (Falls Station). Further trails then lead to the Iguacu Falls themselves, with the Circuito Superior (Upper Circular) being the shortest route, and the Circuito Inferior (Lower Circular) being rather longer. Both of these trails offer excellent views of the waterfalls and can draw large crowds at times. Leading attractions for families spending time in Foz do Iguacu include the Parque das Aves (Bird Park) and the Zoologico Bosque Guarani (Guarani Woods Zoo). On the outskirts of the city, the Itaipu Dam is of epic proportions and comes with a popular visitors centre, where you will learn how nature has been harnessed and now produces around one-fifth of Brazil's total energy needs. More information about Foz do Iguacu Tourist Attractions.

Just a short distance to the south of Foz do Iguacu is the spot where the Parana River meets the Iguacu River, forming the Triple Frontera (Three Borders) of Argentina, Brazil and Paraguay. This point is marked with a prominent stone obelisk, with several further obelisks being situated close by. Visitors with an interest in Brazilian history may like to spend time exploring the region's Jesuit Missions, which date from the 17th century and were once focal points for past jungle settlements. Rather more modern and striking is the bright-white Mesquita Omar Ibn Al-Khatab / Centro Cultural Beneficente Islamico (Omar Ibn Al-Khattab Mosque), which adds a touch of character to the city and is flanked by two tall minarets, standing either side of its central dome. More information about Foz do Iguacu Landmarks and Monuments.

Foz do Iguacu has few existing industries, other than tourism, and so visiting tourists are catered for well at every possibility. Artificial sandy beaches have been created around the lake formed following the creation of the Itaipu Dam and provide important recreational spaces, offering water sports and scenic spots to relax, barbecue and sunbathe. If you are looking for museums in the city, then very few exist. The most notable is the Ecomuseu (Eco Museum), which is situated within the Itaipu Dam complex and focuses on not only its construction, but also how the surrounding environment was affected when flooded. Cruises to the nearby Bertoni Museu (Bertoni Museum) in Paraguay are popular and this attraction lies within the Puerto Bertoni National Park. More information about Foz do Iguacu Museums.

Officially named the Ponte Tracredo Neves, the Ponte Internacional da Fraternidade (Fraternity Bridge) lies just a short distance to the south of Foz do Iguacu and spans the Iguacu River to connect the neighbouring Argentinean frontier city of Puerto Iguazu. This lively tourist city is well linked by frequent buses and is home to a number of attractions, including the Guira Oga Bird Centre, a jungle-related museum, the Luis Honorio Rolon Municipal Nature Park and some good riverside restaurants. To the north of Foz do Iguacu, a further bridge - the Ponte da Amizade (Friendship Bridge), provides the easiest way to cross the Parana River and head into the Paraguayan city of Ciudad del Este, where endless duty free shopping is a true highlight. Also in Paraguay is the town of Hernandarias, where the Itaipu Zoo is a favourite of children, as well as its Museum of Natural History. Those feeling a little more adventurous may like to take a trip along the Black Well Trail (Trilha do Poco Preto), enjoying a cruise, hike and even some jungle kayaking. More information about Foz do Iguacu Attractions Nearby. 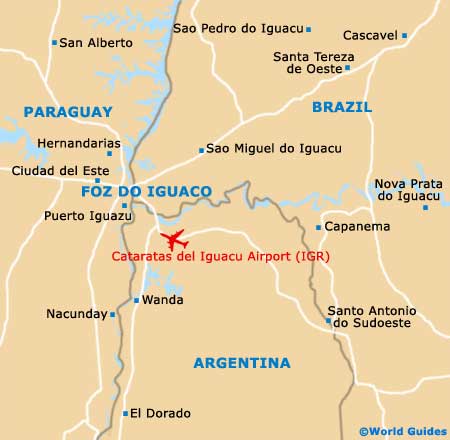