The Republic of Estonia lies in Northern Europe and is a small territory with distinct seasonal attractions. Many tourists choose to visit Estonia during the summer season, although the harsh and snowy winters afford their very own choice of recreational activities, such as ice skating, skiing and even fishing.

Estonia is edged by Latvia, the Russian Federation, the Gulf of Finland and the Baltic Sea. The first settlers arrived at the beginning of the 12th century and many communities soon evolved around the main rivers and their tributaries, such as the Narva and the Parnu. During the mid to late 20th century, Soviet forces occupied much of Estonia until the country finally achieved its independence in 1991, subsequently joining the European Union in the spring of 2004.


Many of the largest and most notable cities in Estonia are scattered around the coastline, such as the ports of Haapsalu, Kunda, Muuga and Paldiski. The capital city of Tallinn stands on the northern coast of Estonia and to the south of the Gulf of Finland, in the province of Harjumaa. Also the country's biggest city, Tallinn is a true gem and boasts many quality sights, such as the historic city centre around the Toompea hill, where attractive cobblestone streets and medieval sights are just waiting to be explored.

Tartu is Estonia's second-biggest city and is sited on the south-eastern side of Estonia, within the Tartumaa area. Very much a student city, Tartu boasts a large and historic university, which was founded in the early 1630s and is amongst the oldest universities in the whole of Europe. 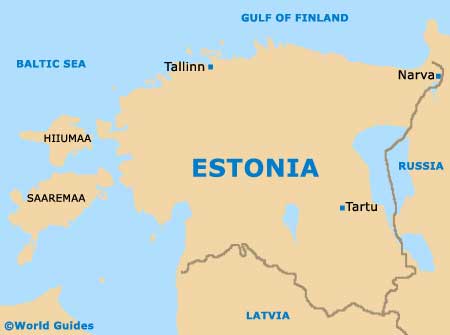