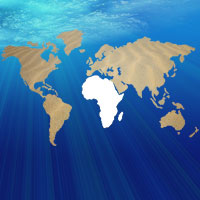 The planet's second-largest and second-most densely populated continent, Africa is currently called home by more than one billion people, which equates to roughly 12 percent of the global population. Africa covers some 30 million square km / 11.6 million square miles and comprises just over 60 different territories, which are grouped in Central, Northern, Eastern, Southern and Western regions. In Tanzania, Kilimanjaro is a record-breaking free-standing mountain and features no less than three volcanic cones. At the other end of the scale, Lake Assal in Djibouti is actually the lowest point in the whole of Africa, while the sweeping sand dunes of the Sahara Desert offer something completely different.

Known for its diamond mines and extensive gold resources, Africa also offers some epic tourist magnets, such as the Great Pyramid of Giza in Egypt, which is actually one of the Seven Wonders of the Ancient World. South Africa is another popular country and is where you will encounter the famous Table Mountain at Cape Town and a multitude of soaring skyscrapers in the modern metropolis of Johannesburg.

Many visitors choose to volunteer in Africa as part of an international project, giving their time freely to teach, improve human rights and carry out much-needed conservation work. Others come to Africa for its wildlife, with spreading national parks and game reserves being home to elephants, giraffes, lions and zebras, amongst many other indigenous African animals. Particularly notable safaris are based around the Okavango Delta and also within the national parks of Etosha, Kruger, Masai Mara, Nairobi, Serengeti, the Simien Mountains and South Luangwa. Kenya is an especially popular safari destination in Africa and features many superb wildlife reserves.

On the far north-westerly tip of Africa and lying next to Algeria, the country of Morocco is another popular tourist destination. Morocco's capital city of Marrakech offers everything from sumptuous Moroccan palaces and mosques, to kasbahs and an enormous lively market (souq) known throughout the world.