The Federal District - or FD as it is often known, is placed firmly within the Planalto Central region of Brazil. It is easiest to think of the region as an island made up of the new and very shiny city of Brasilia, which is surrounded by a natural landscape that is akin to semi-wilderness. There couldn't be a greater contrast between the two.

Tourists visiting the Federal District and in search of Brasilia's historic Old Town will be disappointed - there simply isn't one. The product of town planning in the 1950s, Brasilia is a thoroughly modern city. In Brasilia, its residents live in 'superblocks' and the 12-lane central avenue that runs through the city is known as the Monumental Axis. Most visitors tend to gravitate towards the futuristically styled Metropolitan Cathedral, or linger in the 'Three Powers Square', which lies at the heart of the city. At weekends, locals and visitors like to meander along the paths of the Parque da Cidade.

Close to the city centre is the artificial lake of Paranoá, perennially popular with sporty folk and foreign embassy staff. On its shores is the 'Palace of the Dawn', the Brazilian President's official place of residence.

Brasilia's tourists include any number of thrill seekers, who come here with the expectation of enjoying some free flying. 'Cloud streets' abound in the city's dry atmosphere, while for those who aren't seeking a good thermal wind, a visit to the Brasilia National Park might be more in order. The park lies just north of the city and its expansive landscape offers a welcome respite from the city's hustle and bustle.

Both within and without Brasilia's boundaries, there is a strong tradition for spirituality and religious diversity. Temples and churches are a common feature of the landscape. A short drive from Brasilia, the Vale do Amanhecer - which translates as the Valley of the Dawn, was founded by a spiritual medium and brings together a rather eclectic mix of beliefs. Meanwhile, pilgrims began arriving in the small city of Padre Bernardo in the north of the Federal District from the 1930s, creating a long-standing tradition for worshipping the Divine Holy Spirit. 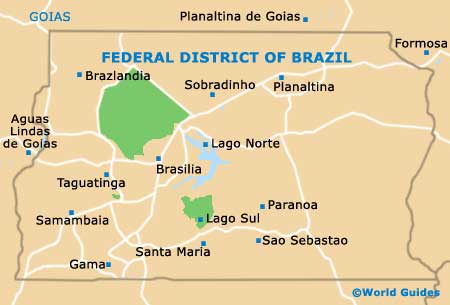