You'd be foolish to touch down in the Southern Brazilian state of Santa Catarina without packing at least a beach towel. Whilst there are plenty of other things to see and do, both in the inland areas of Santa Catarina and along its truly impressive stretch of coastline, beach life definitely rules here.

It pays to pick your beach carefully. Resorts in the north of Santa Catarina tend to offer a lively night scene, whilst in the south, beaches are better suited to keen scuba divers and surfers, as well as those in search of the perfect Robinson Crusoe hideaway. Thrillseekers would do well to head to the resort of Penha, home to 'Beto Carrero World', reputedly the biggest theme park in the Southern Hemisphere. Alternatively, expand your knowledge of marine wildlife with a spot of whale watching, a popular pastime in these parts between July and November.

Straddling the island of Santa Catarina and the mainland is Florianopolis, a city that boasts an impressive 42 beaches all of its very own. Whilst the mainland district of the state's capital city may be of little interest to tourists, the island district most certainly is, with its cobbled streets, historic buildings and all-over picturesqueness.

The interior of Santa Catarina is a far cry from its coastline. Towns such as Blumenau wear their Germanic heritage proudly on their sleeves. German-style buildings and beer-laden annual Oktoberfest celebrations are much in evidence here.

You don't normally associate Brazil with snow, but in the wintertime, the white stuff dusts the jagged peaks of the Serra Geral Catarinense. Amidst the dramatic mountain scenery in the Sao Joaquim National Park, keep an eye out for the odd puma, an elusive and endangered feline known to inhabit the highlands of Santa Catarina. 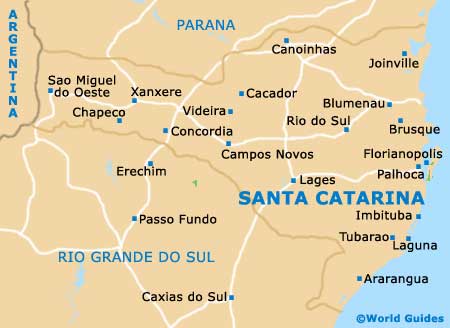