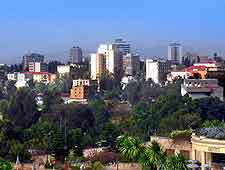 Although it is very true to say that Ethiopia is a poor African country with little in the way of wealth, it is far from being a wasteland of vast desert areas, and certainly does not continually suffer at the hands of war and famine. Indeed, there is a huge expanse of verdant countryside and even a developing tourism industry is now present in Ethiopia, which is rather understated and is slowly managing to change travellers' natural preconceptions of this country.

The landscapes of Ethiopia are often quite dramatic and will likely be remembered forever, with the Bale and Simien mountains being particularly striking and home to some wonderful trekking trails. The enchanting character of the Danakil Depression (Afar Triangle) is known for its important fossil discoveries and intense heat, while the capital city of Addis Ababa is considerably more western in character, with high-rise buildings, tourist information outlets (on Meskal Square, Bole Road, Cameroon Street, Churchill Avenue, Menelik II Avenue and Ras Desta Damtew Street), a reasonable transport infrastructure and plenty of places to stay. 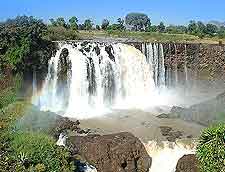 Offering a rather refreshing lack of traditional tourist traps and the opportunity to bargain over most prices, Ethiopia provides much more than first meets the eye. The main attractions tend to be of a historical and religious nature, being particularly concentrated in Addis Ababa, where both the St. George Cathedral and the Holy Trinity Cathedral reside, completed in 1896 and 1942 respectively. Somewhat older and located in Axum, on the northern side of Ethiopia, the Old Cathedral of St. Mary of Zion and Treasury dates from the 17th century. In Gondar and of a similar age is the spectacle that is the World Heritage Site of Fasil Ghebbi, which is better known to tourists as the Royal Enclosure and comprises the Fasilades Palace and a series of magnificent castles. More information about Ethiopia Tourist Attractions. 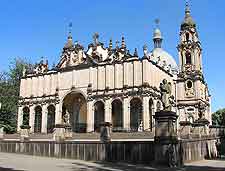 There are some really extraordinary landmarks located in Ethiopia and most visitors find that their rigid preconceived ideas of this region of Africa are quite incorrect. The scenery around the Tisisat Falls couldn't be more lush and less desert-like, with the Blue Nile River cascading into the gorge below. Various ancient stone obelisks (stales) and monoliths are worth searching out in Ethiopia, with the best examples being found at Tiya and also at Axum, where the oldest are believed to date back some 5,000 years. In Addis Ababa, important local landmarks are in abundance, with the most photographed being the Lion of Judah Monument next to the train station, and the Menelik II Square, where a prominent statue of the city's proud founder stands. In the town of Lalibela, the series of churches elaborately carved straight out of the rock are quite a sight to behold, with the Church of St. George being particularly impressive and regarded by many to be the 'Eighth Wonder of the World'. More information about Ethiopia Landmarks and Monuments. 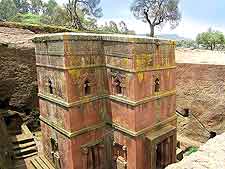 Ethiopia's rich and rather surprising archaeological heritage and culture is well documented in a number of important museums. The National Museum of Addis Ababa is amongst the most popular and is famous for its important 3.5 million year-old 'hominid' skeleton, which is an ancestor of today's human race. Nearby and located on the southerly side of Meskel Square, the Addis Ababa Museum is packed with information about the political and economical history of Ethiopia. Also in this capital city is the Ethnological Museum and its wealth of religious paintings and artefacts. In Addis Alem, the Marian Museum is another highlight and contains various African costumes and treasures once owned by the rulers of this country. More information about Ethiopia Museums and Art Galleries. 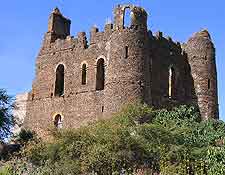 A trip of two weeks in Ethiopia is barely long enough to scratch the surface of the huge quantity of sights and appealing destinations that should be investigated, since getting around can be quite time-consuming. If you are here for longer as part of an African adventure, then you might like to visit one of the surrounding countries. Kenya is especially enticing, with the closest attractions coming in the form of the Chalbi Desert, and the towns of Marsabit and Moyale. Bordering the western side of Ethiopia, Sudan is another enormous African country, with its town of Er Roseires being just 60 km / 37 miles away and its city of Kassala being a little further. Both Somaliland and Djibouti are very accessible from eastern Ethiopia and front the Gulf of Aden, while to the north, Eritrea and its beautiful Red Sea coastline is a little more difficult to explore. More information about Ethiopia Attractions Nearby. 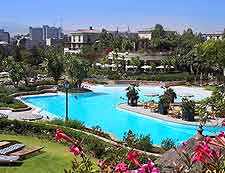