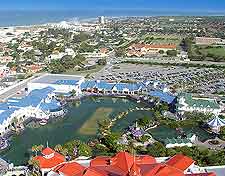 Serving northern South Africa as a very prominent transport hub, Port Elizabeth is close to Jeffrey's Bay and is part of the Nelson Mandela Metropole. Central Port Elizabeth enjoys a relatively elevated setting upon a series of steep hills, meaning that the views of Algoa Bay are excellent.

A number of popular sandy beaches are close to central Port Elizabeth, together with a selection of pleasant parks and tourist attractions. Whilst the city does contain some notable historical architecture, there are also many more modern 20th century buildings. Of note, the tourist information offices referred to as 'Tourism Port Elizabeth' are to be found within the popular Donkin Reserve. 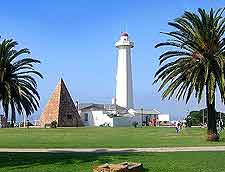 Port Elizabeth goes by a number of different names, being affectionately known by some as the 'Friendly City', the 'Windy City', or simply as 'PE'. When it comes to tourist attractions, the beaches will generally feature at the top of most itineraries - particularly Humewood Beach. However, the Bayworld complex is especially popular and features its very own Oceanarium, while others may prefer a trip to the Seaview Game and Lion Park, the Port Elizabeth Opera House or the Donkin Lighthouse. More information about Port Elizabeth Tourist Attractions. 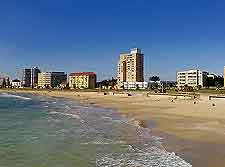 The landmarks of Port Elizabeth add much character to the cityscape, with its Campanile bell tower being much visited and boasting exceptional city views. Other prominent sights around the city include Fort Frederick, the Horse Memorial, the Prester John Memorial and the Port Elizabeth City Hall, where the local government resides. The Main Public Library is also of note and this historical building stands next to the Market Square, where it dates from 1902 and contrasts greatly with the adjacent modern, much less ornate buildings. More information about Port Elizabeth Landmarks and Monuments. 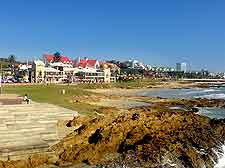 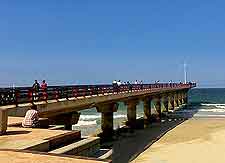 Around Port Elizabeth are many surrounding townships, with its sister city of Uitenhage being extremely close. The innumerable beaches around Port Elizabeth lend themselves to popular day trips, with surfers favouring the coastline of Jeffrey's Bay. Cape Recife offers a rather picturesque beach, while the seaside town of Port Alfred is famed for its marina and sailing possibilities, being located part-way between Port Elizabeth and East London. For history buffs, a trip to the past garrison town of Grahamstown is a must. More information about Port Elizabeth Attractions Nearby.