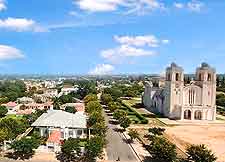 Touted as being a leading holiday destination of the very near future, the up-and-coming tourism scene in Mozambique is undeniable. With spectacular tropical beaches, superb scuba diving, various island-hopping opportunities and more than a handful of national parks, Mozambique certainly provides variety.

The troubled days of Mozambique seem firmly in the past, as this country moves forward in these more peaceful times and becomes all the more accessible to travellers. The northerly Zambezi River features plenty of scope for expeditions, while the southern side of the country is more suited to the less adventurous beach-going crowd. Maputo serves as the capital city, with tourism information being available here at the Fundo Nacional de Turismo (National Tourism Fund), which has an office on the Avenida 25 de Setembro and lots of glossy brochures. 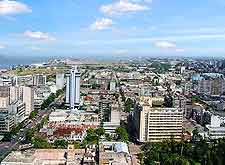 Mozambique's almost endless coastline contains many beautiful, remote and secluded beaches. Some of the most popular are based around the archipelagos of Bazaruto (south) and Quirimbas (north), both of which have various exotic beaches and dive spots to choose between. Further appealing beaches are to be found around the southerly Baia de Inhambane, and the seaside towns of Ponta d'Oura and Ponta Malongane. Also in Southern Mozambique are the beach resorts of Inharrime, Pomene, Ponta Mamoli, Tandje and Zavora. Dolphins, whale sharks and manatee-like dugongs can be spotted along some coastal stretches, and seasonal whale watching is always a big hit with tourists. More information about Mozambique Beaches. 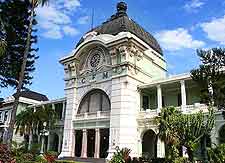 Maputo city lies on the far southern side of Mozambique and is known for its noticeable Mediterranean character, tree-lined avenues and vibrant pavement cafe culture. As African capitals go, Maputo is certainly amongst the most attractive and comes with innumerable tourist attractions, such as its Municipal Market, Botanical Gardens, Praca dos Herois Mocambicanos and Praca de Independencia - a spacious plaza dominated by the Cathedral of Our Lady of the Immaculate Conception (Catedral de Nossa Senhora da Conceicao). Walking tours of Maputo are recommended if you have a couple of hours going spare, as is a ride on the regular hop-on hop-off land train - easy to spot with its bright yellow and green colours.

The Mozambican civil war greatly affected the country's big game reserves, although animal numbers are certainly increasing, thanks to restocking programmes and successful conservation schemes. Safaris are possible in many of the national parks and tourists may be lucky enough to see anything from African elephants, lions and leopards, to antelope, crocodiles, giraffes, hippos, hyenas and zebras, along with many other animals. 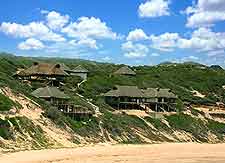 Many of the country's most important and impressive man-made landmarks reside within Maputo, and so if you are on holiday in the capital, you can expect to see recognisable sights such as the Maputo Fortress (Fortazela) and the Statue of Samora Machel - a prominent feature of the Praca da Independencia. Also in Maputo are two of the country's most special and unexpected structures, its Central Railway Station (Caminho dos Ferros) and Iron House (Casa de Ferro), both of which were designed by none other than Gustave Eiffel - of Eiffel Tower and Statue of Liberty fame. In Songo, the Cahora Bassa Dam is another structure of note, while the Mozambique Island (Ilha de Mocambique) ranks as a natural landmark in its own right. More information about Mozambique Landmarks and Monuments.

Maputo is also the place to come for historical information and cultural attractions. The Museum of the Revolution (Museu da Revolucao) on the Avenida 24 de Julho is a good place to find out about Mozambique's historic struggle for independence against its Portuguese colonial rulers. Situated on the southern side of downtown Maputo, on the Praca Travessia do Zambeze, the Museum of Natural History (Museu de História Natural) contains exhibits relating to indigenous wildlife. At Maputo's National Museum of Money (Museu Nacional da Moeda), on the Praca 25 de Junho, there are examples of the currency of the country over the years. Napula's National Museum of Ethnology (Museu Nacional de Etnologia) may also be of interest, along with the Maritime Museum (Museu Maritimo) on the Ilha de Mocambique, where the region's rich region's seafaring is showcased for all to enjoy. More information about Mozambique Museums and Mozambique Art Galleries. 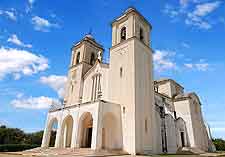 Bounded by the Indian Ocean on its eastern access, the rest of Mozambique borders a number of adjacent countries, each of which offer a different African experience and can be reached by road or plane. To the north-west, Malawi and its famous lake draws tourists by the thousand each year, coming to marvel at the wildlife and beautiful scenery. Also to the north-west and next to Malawi is Zambia, where the South Luangwa National Park and the Lower Zambezi National Park are particular highlights.

Tanzania lies directly to the north and has some much-visited attractions, such as Mount Kilimanjaro, the Serengeti Plains and the Mahale Mountains National Park, as well as some beautiful sandy beaches. Zimbabwe is located to the west and is where you will find the Victoria Falls (Mosi-oa-Tunya) - the largest waterfall in the world, separating Zimbabwe from Zambia, with regular flights between Maputo and Harare (the Zimbabwean capital) being available. To the south-west are Swaziland and South Africa, home of famous cities such as Cape Town and Johannesburg. More information about Mozambique Attractions Nearby.