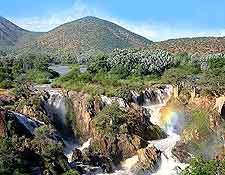 A particularly hot and dry country, Namibia is located in Southern Africa, where it is bounded on its easterly axis by the Kalahari Desert, and to the west, by the South Atlantic Ocean. With breathtaking scenery, a lengthy natural coastline, a wealth of African wildlife, expansive deserts and towering mountains, Namibia is certainly diverse.

Located in the heart of Namibia and within the Central Highlands, the highly organised city of Windhoek serves as the capital and is known for its German colonial past. Windhoek is a truly cosmopolitan city, with its population comprising a diverse ethic mixture. 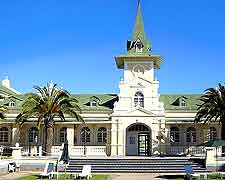 The city centre is divided by Independence Avenue, with the Gustav Voigts Centre and the Post Street Mall being located here and central to the local shopping scene.

Located on Independence Avenue and just across from the Owela Museum is Windhoek's tourist information office - Namibia Tourism, where you can outline your sightseeing itinerary and organise any ongoing travel plans. 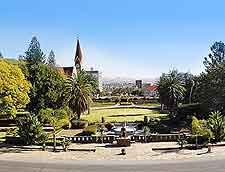 The coastline of Namibia is a serious attraction and boasts many quiet, tropical beaches and busy tourist resorts. Some of the best beaches line the Skeleton Coast, a famous stretch named after the profusion of whale bones that could once be found along its shoreline, during the past period of whaling. The beach at Cape Cross is a tempting spot to hang out and famous for its profusion of fur seals, although it should be noted that swimming in the South Atlantic Ocean is only for the brave - since these waters are often extremely cold, despite the strong sunshine. For traditional seaside fun in Namibia, both Walvis Bay and Swakopmund will more than provide, with seasonal whale watching and windsurfing being available respectively and adding to the overall appeal. More information about Namibia Beaches. 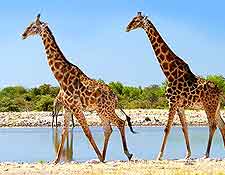 Many people on holiday in Namibia choose to stay in Windhoek, which is a good base and has plenty of tourist attractions. The most notable of these include the Christ Church (Christuskirche), the Ink Palace (Tintenpalast) and the Old Fort (Alte Fest), along with the National Botanic Garden, the Namibian Craft Centre and a spacious green space named Zoo Park, where animals were once kept. Further major draw cards in the capital include the Kristall Kellerei Winery and the Windhoek Independence Stadium, which operates as a leading sports and events venue. 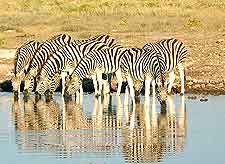 Namibia works hard to look after its precious wildlife and has instigated a series of successful conservation programmes of late. If you are looking for a safari experience, then the Etosha National Park at Ombika is the place to start, with its African elephants and lions, giraffes, rhinos and zebras, often spotted in groups around the numerous waterholes. Indigenous wildlife is also in plentiful supply at the national parks of Bwabwata, Mamili and Mudumu, all of which are to be found in the Caprivi area. Conveniently close to Windhoek, the Daan Viljoen Game Park at Khomas is a popular spot for tourists, who come here in their droves to enjoy a game drive or afternoon hike. More information about Namibia Tourist Attractions and Namibia National Parks. 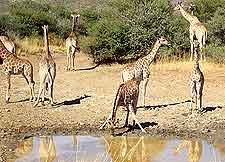 The landscape of Namibia is one of vast sand dunes, beaches, canyons, towering mountains and busy towns and cities, with Windhoek being the largest and most important by far and home to national sights, such as the Gibeon Meteorite National Monument, Franke Tower and nearby Heroes Acre, sited at the base of the Auas Mountains. Other appealing Namibian destinations include Katima Mulilo, Keetmanshoop, Luderitz, Oshakati, Otjiwarongo, Rundu and the Spitzkoppe granite peaks, close to Usakos, as well as the Twyfelfontein World Heritage Site and its archeological rock art. 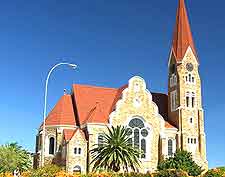 At Grootfontein, it is the enormous Hoba Meteorite that draws the crowds, with its impressive statistics and attractive amphitheatre setting, as well as the giant baobab tree simply named 'Tree 1063'.

Elsewhere, the Epupa Falls in north-western Namibia is one natural landmark not to be missed, as is the southerly Fish River Canyon, where the odd chacma baboon or mountain zebra may be spotted. More information about Namibia Landmarks and Monuments. 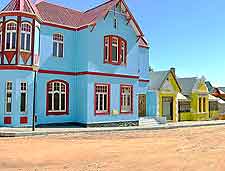 The best known of Namibia's cultural offerings is undoubtedly its National Art Gallery in Windhoek. However, Namibia also contains a selection of other public and private art galleries and exhibitions, a high proportion of which are concentrated in Windhoek. A number of these are located on or near to the Robert Mugabe Avenue, such as the Alte Feste Museum and its historic artefacts. Also in Windhoek and close to Eros Airport - the city's number two airport after Hosea Kutako International Airport, the National Earth Science Museum on Aviation Road comes with fossils, minerals, meteorites and other geological finds. Further museums of note reside in Grootfontein, Luderitz and Outjo, with information and collections relating to weaponry, diamond mining and antiquities. More information about Namibia Museums and Namibia Art Galleries. 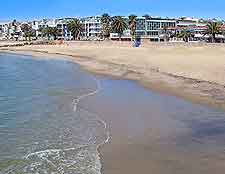 Namibia is made up of four main zones, each of which presents its own set of possibilities when it comes to day trips and excursions. Southern Namibia borders South Africa, where Cape Town is the capital city and famed for its centrally located Table Mountain. Durban, Johannesburg and Port Elizabeth are additional popular tourist cities located in South Africa, while to the east / south-east is Botswana, where Gaborone is the modern capital and features highlights such as its Orapa House, Botanical Gardens, National Museum and Art Gallery, Kgale Hill and St. Claire Lion Park.

To the north, the now peaceful Angola is working hard to reinvent itself as a tourist destination, with three border crossings and regular flights between Windhoek and Luanda, the Angolan capital. Lying to the far east is Zimbabwe, and to the north-east is Zambia and its spreading national parks of Kafue, Lower Zambezi, Lochinvar, Luangwa, Nsumbu and West Lunga. More information about Namibia Attractions Nearby.