Think of Florida and your mind may immediately turn to manatees, alligator-infested swamps, awesome beaches and friendly performing dolphins. It may on the other hand conjure up visions of theme parks, Mickey Mouse and Miami Beach. Everyone has a different vision of this state, perched on a peninsula in the Deep South of the US, probably because it has so many different sides to its character.

The first European to wade ashore the Florida coast was a Spaniard known as Ponce de León. He named the area 'la Florida', apparently in honor of the Spanish Easter celebrations of 'Pascua Florida'. After many hundreds of years of English and Spanish rule, this became the 27th US state in 1845,

Tourism has played a huge part in Florida life since the 1920s, when there was a flurry of land development in the state. Since then, it is also become popular as a place to move to when you retire. The Port of Miami is known as the 'Cruise Capital of the World', and can take some of the biggest boats on the world's oceans today.

Florida's unusual landscape has served as an inspiration for many writers over the years, including Ernest Hemingway and Tennessee Williams. It is also a haven for sports lovers, with lush golf courses and tennis courts as standard.

Disney World is classed as the most-visited entertainment resort in the world, which is quite a feat. Developed by Walt Disney in the 1960s and first opened to the public in 1971, the original Magic Kingdom has seen many new additions to the site at Lake Buena Vista.

Florida's soil has been the taking-off point for every US human space flight since 1968, although the Kennedy Space Center, located on Merritt Island, lies unusually silent on that account at the moment. Currently, only unmanned rockets are leaving its famous launch pad. 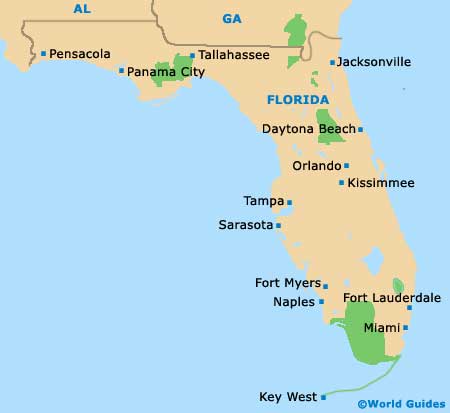