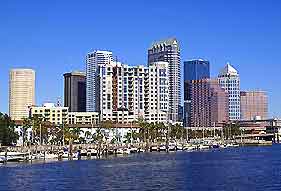 Florida's small city of Tampa is full of charm and character, and this city sits on a major estuary halfway down the west coast of Florida. Tampa is home to a busy port and is close to the historic Ybor City, famous for its cigar production and tobacco industry.

Boasting several notable tourist attractions, including the Busch Gardens theme park, the Florida Aquarium and many superb museums, Tampa stands across the bay from St. Petersburg, with plenty of beach opportunities within easy reach of the city center, including both St. Pete Beach and Clearwater Beach. Tampa is divided into a number of regions, such as Downtown, the Cultural district, the Hyde Park Historic neighborhood and the Waterfront region.

Holiday makers looking for tourism advice should head to the Tampa Bay Visitor Information Center on East Jackson Street, the Convention and Visitors Bureau on North Tampa Street, or alternatively the Ybor City Chamber of Commerce, where tourist information is readily available. Most large hotels will also provide a good selection of leaflets within their lobby. 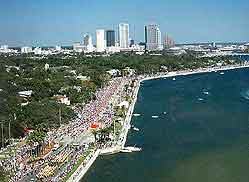 Hotels in Tampa generally reduce their hotel rates at weekends and also during the summer months, offering genuine bargains and enticing packages. Tampa hotel seasonal rates vary, with summer rates being considerably less than the winter rates. There are also a selection of hotels that can be found nearby the Tampa International Airport (TPA), which is around 8 km / 5 to the west and next to Drew Park. Budget hotels stand on East Busch Boulevard and East Fowler Avenue, while some reliable mid-range lodging resides on the South Harbor Island Boulevard and North Rocky Point Drive. More information about Tampa Hotels.

Tampa has many superb tourist attractions, including the Busch Gardens - with thrilling white-knuckle rides and a vast zoo containing more than 2,700 animals; the Adventure Island - a tropical island theme with fast rides and roller coasters; the Florida Aquarium - boasting over 10,000 aquatic plants and animals, including alligators, free-flying birds and a giant Pacific octopus; J.B. Starkey's Flatwoods Adventures - lively guided eco-tours on safari buggies, with information about Native Americans and local wildlife; the Lowry Park Zoo - containing one of Florida's finest collections of animals, including manatees and a petting area for children; and the Malibu Grand Prix - offering a range of adrenaline-charged driving activities and Go Karts. 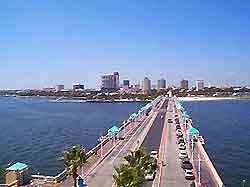 Other popular tourist attractions in Tampa include Raymond James Stadium - an American football stadium, home to the Tampa Bay Buccaneers, the city's official NFL team; the MacDill Air Force Base (AFB) - a district in its own right, with strategic importance to the US Military; the Tampa Convention Center - a stylish on downtown the waterfront, with a vast amount of exhibition space; the Christopher Columbus Statue - a fine monument and tribute to the world-famous explorer; the Sacred Heart Catholic Church - a stunning religious building, dating back to the early 20th century; and Alderman's Ford Park - an attractive green belt area offering a host of recreational activities. More information about Tampa Tourist Attractions and Tampa Landmarks.

Tourist attractions located nearby are easiest to reach if you have your own set of wheels, meaning that tourists often favor car rental in Tampa as their chosen mode of transport. Top attractions within easy driving distance of the city include the Canoe Escape - a self-guided trip downriver, passing some truly spectacular scenery along the way; Dinosaur World - an exciting and educational attraction, with an outdoor museum and hands-on activities; the Historic Bok Sanctuary - a preserved botanical parkland built on the highest point in Florida; the St. Petersburg Museum of History - full of information about the history of the area over the last 200 years; and Weeki Wachee Springs - a predominantly water based attraction with underwater mermaid shows, river boat rides and scenic cruises. More information about Tampa Attractions Nearby.

Tampa also has plenty of impressive museums, which provide interesting and insightful information about this increasingly popular part of Florida. Amongst the most visited are the American Victory Mariners Memorial and Museum Ship - a historic vessel famous for serving in the Second World War; the Henry B. Plant Museum - situated at the former Tampa Bay Hotel; the Museum of Science and Industry (MOSI) - including the BioWorks Butterfly Garden and the IMAX Dome Theater; the Tampa Bay History Center and Museum - full of heritage information about the American Indians who once populated this area; the Ybor City Museum State Park - celebrating the district's role in the tobacco industry; the Tampa Museum of Art - home to many themed exhibitions, galleries and splendid collections of art; the Salvador Dali Museum - celebrating the life and works of Salvador Dali, with a large collection of the artist's finest works; and the Tampa Gallery of Photographic Arts - a non-profit making organization promoting local Floridian artists. More information about Tampa Museums and Tampa Art Galleries. 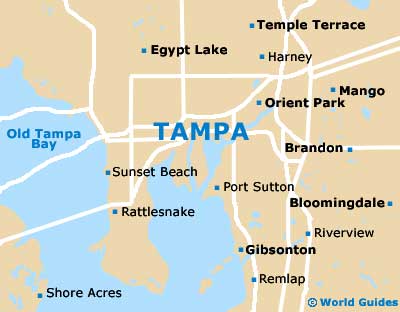