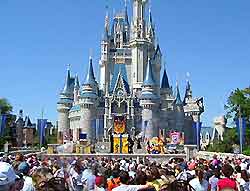 Orlando, Florida FL, is without doubt the theme-park capital of the world, and the resort's most famous tourist attraction is Walt Disney World (WDW). The vast Disney complex incorporates a host of state-of-the-art theme parks, with magical characters and thrilling rides, and is located on the southwestern outskirts of Orlando.

There is truly something for everyone in Orlando, with millions of visitors and tourists arriving here each year to marvel at the wonders, which include Universal Studios, SeaWorld, the Kennedy Space Center, the Epcot Center and Disney's Magic Kingdom, home to the enchanting Cinderella's Castle. Away from the theme parks and major tourism in Orlando, you will also find much history and many peaceful spots, together with gardens, fine dining, impressive museums, charming neighborhoods and a major nighttime scene.

Although there are a number of different tourism outlets spread around Orlando, the main Tourist Information Bureau is to be found on International Drive and provides a useful range of maps, discounted theme park tickets and attraction guides. Also available here are details about other popular Florida holidays and nearby destinations, such as Daytona Beach, Palm bay and Port St. Lucie, as well as the neighboring attractions of Busch Gardens, Cocoa Beach and the Kennedy Space Center. Further leaflets are available in the lobbies of most large hotels, and also at the nearby Orlando International Airport (MCO), which lies next to Lake Nona, Lake Warren and Boggy Creek.

Orlando contains a range of hotels and a vast array of accommodation can be found throughout the area, particularly in and around the Disney and Universal theme parks. The famous International Drive features many further hotels, including numerous budget, mid-range and luxury choices. Those who have invested in Orlando car hire will discover that additional lodging options line the I-4 interstate, and also the US 192 highway within nearby Kissimmee, being just a short commute away and much cheaper than the chain establishments along International Drive. More information about Orlando Hotels. 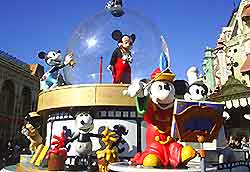 Orlando contains many premier tourist attractions, including Cypress Gardens - Florida's first ever theme park, with more than three-dozen rides and a vast selection of shows; Magic Kingdom - the most famous of the four parks that make up Disney World; Disney's MGM Studios - a theme park offering an unusual mix of behind the scenes studio tours with exciting rides and live shows; Disney's Animal Kingdom - one of the latest additions to Disney's Orlando-based attractions with a strong nature theme; Epcot Center - less of a Disney theme and more of an educational edge, together with fascinating rides, shows and interactive exhibits; Downtown Disney - an evening-only complex with an array of entertainment areas; Universal Studios - combining the original theme park with Orlando's newer sister park 'Islands of Adventure'; and Wet 'n' Wild - remaining one of the best water parks in this part of Florida. Another favourite with all ages is SeaWorld - a sister park of Busch Gardens, with regular shows featuring sea mammals throughout the day, including the Shamu Killer Whale show.

Other popular attractions in Orlando include the Bank of America at duPont Center - a particularly attractive skyscraper, gracing the skyline; Big Tree Park - home to one of the oldest and largest trees in America, named 'the Senator'; the Bok Tower Gardens - close to the famous Radisson Resort Parkway, a tranquil spot away from busy city life; the Harry P. Leu Gardens - an ideal place from which to escape the theme park glitz; Lake Louisa State Park - a vast park providing visitors with the chance to relax and enjoy the picturesque surroundings; Orlando City Hall - sitting on five acres / two hectares of land known as the City Hall Commons and typical of an American government building; and the SunTrust Center - a giant 35-storey building, notable for its four striking pyramids. More information about Orlando Tourist Attractions and Orlando Landmarks. 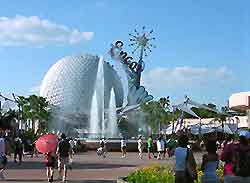 Close to the city are a number of popular Floridian destinations, highly suitable for day trips and longer weekend excursions. Car rental in Orlando is therefore extremely popular with those wishing to explore more of this part of Florida, with many choosing to drive to the nearby Busch Gardens theme park and its exciting white-knuckle rides, or pay a visit to the Kennedy Space Centre, which is famous for being the official launch station for many NASA rockets and satellites. If you favour the sun, sea and sand, then consider driving to either Cocoa Beach or to Daytona Beach, with both of these destinations boasting an endless expanse of white sand. Nature lovers will appreciate the conservation work carried out by the Merritt Island Wildlife Refuge at Titusville. More information about Orlando Attractions Nearby.

Orlando also contains a number of superb Floridian museums, the best of which include the Mennello Museum - dedicated to the art collection of the late Earl Cunningham; Wells' Built Museum of African American History - previously a hotel that has been home to some of jazz's greatest names as guests; the Science Center - featuring hundreds of interactive scientific attractions and related information; Ripley's Believe It Or Not Museum - located on International Drive, full of fascinating collections; the Orlando Museum of Art - featuring a range of displays of American art from the 19th century to the present; and the Wyland Galleries - in the Walt Disney World district, specializing in paintings of sea life. More information about Orlando Museums and Orlando Art Galleries.