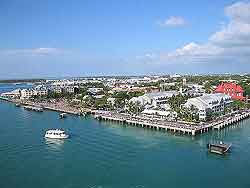 Key West is a small island, closer to Cuba than actual mainland Florida (FL), and attracts tourists from around the world, with regular cruise ships docking here each day. Duval Street is Key West's tourist epicenter, with the northern end marked by Mallory Square.

Home to regular festivals and parades, a number of scenic beaches and some of Florida's best scuba diving, snorkeling and deep-sea fishing, Key West is divided into two main districts. The Old Town area contains many tourist attractions, sights and hotels; and New Town is occupied by mainly businesses and locals. During recent years, much of Key West has been restored, to promote tourism on this popular, charming and somewhat eccentric island, with many other Keys within easy reach, including Florida's Key Largo and the beautiful Lower Keys.

The Key West Chamber of Commerce Visitors Center on Wall Street is a good place to come for tourist information, and offers a useful accommodation booking service. Hotels generally suit most budgets, with a reliable selection of accommodation being located around the area, including many hotels standing within the New Town district, on Duval Street, along the South Roosevelt Boulevard and on Truman Avenue. There are also several large hotels near to the Key West International Airport (EYW), providing affordable lodging with good transport connections, while Key West vacation rentals and apartments tend to cater for families, often being close to South Beach, Rest Beach and Smathers Beach. More information about Key West Hotels. 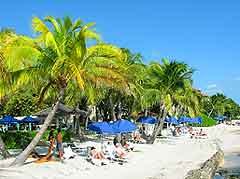 Tours and trolley rides provide the perfect way to visit the island's many world-class tourist attractions, including the Audubon House and Tropical Gardens - a well-preserved 19th-century home with landscaped tropical gardens; Bayview Park - a memorial in the New Town, commemorating soldiers who fought in the Civil and Vietnam Wars; the East Martello Tower - standing close to the airport, a fort now housing the museum of East Martello; the Key West Aquarium - the world's oldest aquarium containing all manner of exotic sea creatures; Mallory Square - the most popular public spot for viewing Florida's famous sunsets; the Old Town Trolley - an ideal way to see the island, with pick-ups at numerous hotels along its route; Simonton Street Beach - located near to the harbor, overlooking the Gulf of Mexico; and South Beach - facing the Atlantic and also known as City Beach, lined with a host restaurants and shops.

Other popular attractions in Key West include the City Cemetery - standing in the center of town, known for its memorial and intricate carvings in honor of sailors who fell in the sinking of the battleship USS Maine; the Ernest Hemingway Home - former home of the popular writer Ernest Hemingway, now an interesting museum; the Fort Zachary Taylor Historic State Park - a fort built in the mid-19th century and used in the Spanish-American War; the Havana Cigar Factory - located in a delightful two-storey Speakeasy Inn on Duval Street; the Key West Lighthouse - the tallest building for miles, originally built in the 1840s; and the Southernmost Point - set on the beak of land to the south of Covington Avenue, probably the most photographed part of this area. More information about Key West Tourist Attractions and Key West Landmarks. 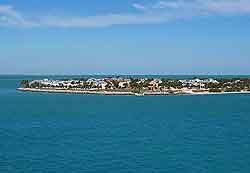 Tourist attractions situated nearby Key West include the Biscayne National Park - just south of Miami, near the town of Homestead and a three-hour drive away; the Conch Tour Train - an open-air jeep disguised as a train, covering the entire island's attractions and history; the Dry Tortugas National Park and Fort - with seven beautiful islands standing around 70 miles / 112 km to the west; the Everglades National Park - within easy reach of Key West, a must-see natural attraction known for its vast salt marshes and rich wildlife; Key Largo - the northernmost inhabited island of the Florida Keys, full of history and attractions; and the Lower Keys - sited between Key West and the famous Seven Mile Bridge, a collection of quieter islands with exquisite beaches, such as Looe Key, Tiny Little Duck Key, Ohio Key and Big Pine Key.

Key West is also home to a multitude of museums and similar attractions. These include the Duval Street Wreckers Museum - full of information about the early 19th-century wrecking industry which transformed this into one of the richest towns in the area; the Key West Museum of Art and History - built as a customs house in the early 1820s; the Mel Fisher Maritime Heritage Society Museum - an intriguing museum displaying some of the treasure salvaged from the shipwrecks of Spanish galleons; the Caribbean Gallery - an impressive gallery with many stylish paintings and sculptures on Caribbean art; the Gingerbread Square Gallery - believed to be one of the oldest art galleries in Key West; and the Mindless Matter Gallery - with many intriguing contemporary works of art and painted furniture, including works by Nancy Carlson. More information about Key West Museums and Key West Art Galleries. 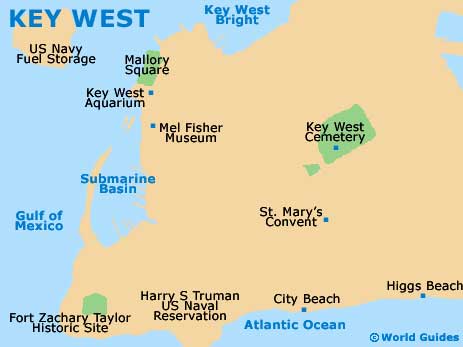