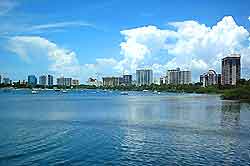 Sarasota is one of Florida's most affluent cities and dates back to the 1880s. Standing beside Sarasota Bay on the Gulf of Mexico, the city comprises the popular tourist hotspots of Lido Key, Bird Key and St. Armand's Key. Sarasota is also close to Siesta Key, Tampa, and St. Petersburg, and offers many truly world-class, sandy beaches and scenic coastlines. Famous for its Ringling Circus Brothers lavish museums and buildings, the city is also known for its arts scene and superb, historic golf courses.

Sarasota offers tourists and business travelers a good selection of hotels. Accommodation is concentrated in the city center, along the Tamiami Trails, Ocean Boulevard, University Parkway, Ritz Carlton Drive and the Boulevard of the Arts. Further hotels can be found in neighboring towns and cities, such as Port Charlotte, Bradenton and St. Petersburg, and close to the nearby Sarasota Bradenton International Airport (SRQ). Vacation rentals are especially popular with families and include modern condos overlooking Crescent Beach and Siesta Beach, as well as waterfront properties in the appealing Lido Key area. More information about Sarasota Hotels. 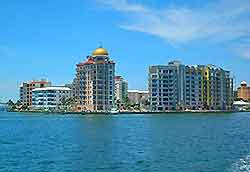 Tourism has long been a staple part of local life, influenced by the famous Florida sunshine and sandy beaches. The city's main tourist information center is the Sarasota Convention and Visitors Bureau on the North Tamiami Trail. Of note, the principal tourist areas include the downtown district, north Sarasota, Lido Key, Longboat Key and Oyster Bay.

There are many popular tourist attractions here, including Mote Marine Aquarium - boasting an enormous 135,000-gallon shark tank and numerous other smaller tanks; Circus Sarasota - based on a European-style circus, with world-class acts and performances; the Ed Smith Sports Complex - a major league baseball complex hosting many frequent events, including car shows and concerts; Jungle Gardens - a collection of lush tropical plants from all over the world, including some extremely rare specimens; and Siesta Key - to the southwest of the city, featuring spectacular stretches of beaches, marinas and canals. 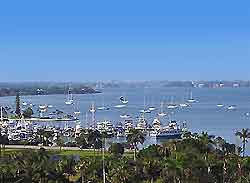 Tourist attractions and excursions close to Sarasota include Orlando - just a two-hour drive to the northeast of the city, containing Disney's Magic Kingdom, one of America's most famous theme parks and home of Mickey Mouse; Tampa - located around an hour to the north of Sarasota, a major city on Florida's western coast, with many exceptional family attractions; Anna Maria Island - situated above Longboat Key, with magnificent beaches and breathtaking coastal views; Gamble Plantation - to the northeast and home to numerous important buildings dating back to the 1840s; and South Lido Park - located at the southern end of Longboat Key, featuring Sugar-Sand Beach, one of the area's most popular beaches. More information about Sarasota Attractions Nearby. 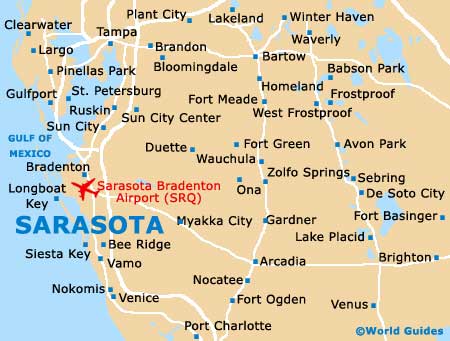