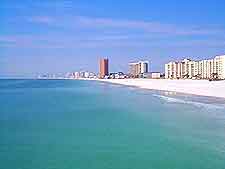 Panama City is one of Florida's most popular spring break resorts and attracts a variety of sightseers. With an impressive 27-mile / 43-km stretch of coastline, Panama City is home to superb beach areas, extending to the east from St. Andrew's State Recreational Area, which is one of the best beach areas in Panama City, featuring a lagoon, swimming, water sports and nature trails.

With many commercial areas nearby, Panama City Beach is without doubt the main tourist attraction in this part of Florida. Panama City is also known for its inexpensive shops, restaurants and bars, and also its amusement parks and lively summer months. The city's recently opened Northwest Florida Beaches International Airport demonstrates its commitment to improving its transport facilities and infrastructure. 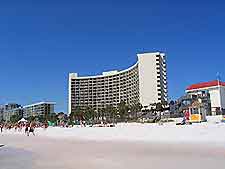 With its stunning coastal location and miles of white sandy beaches, it is easy to see why tourism has prospered in Panama City. The area's main tourist information center is the Visitors Bureau along the Panama City Beach Parkway, which is open daily. Here you can obtain a large selection of leaflets about Panama City's many tourist attractions, hotels, condos and amusement parks, together with general tourism advice and information about the area's many seasonal events, including swimming, kayaking, scuba diving and hiking.

Accommodation in Panama City consists of many popular hotels and well-known chain motels, many of which line the scenic beachfront, often offering superb views. Luxury hotels are clustered around the eastern end of Panama City beach, with many family-oriented hotels situated on the western side. More reasonably priced accommodation can be found inland, around Panama City's outskirts, and in a number of nearby camping sites. More information about Panama City Hotels. 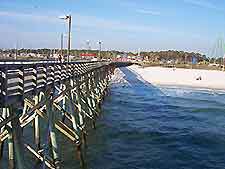 Panama City has a range of impressive tourist attractions, including the Gulf World Marine Park - exciting fun for all the family with an abundance of sea creatures; Panama City's Zoo World Zoological and Botanical Park - includes hundreds of animals from all over the world and a children's petting zoo; and the Emerald Falls Family Recreation Center - featuring a variety of racetracks for go-karts. More information about Panama City Tourist Attractions.

Some of the best museums and art galleries in Panama City include the Junior Museum of Bay County - offering a collection of interactive exhibits, model trains, science stations and much more; Panama City's Man in the Sea Museum - home to a wide selection of underwater apparatus and vehicles, including submarines; and the Visual Arts Center of Northwest Florida - a popular art school and museum with many hands-on exhibits suitable for children. More information about Panama City Museums and Art Galleries.