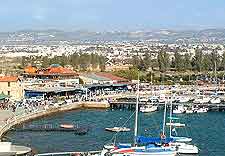 Lying next to the island's beautiful Mediterranean coastline, in south-western Cyprus, the popular town of Paphos (Pafos) is typically Greek in character. Paphos is a fairly remote part of the island, complete with its very own airport, and its fairly isolated setting really is part of its charm.

However, although Paphos may well be home to some spectacular archaeological attractions and a rich Cypriot history, don't be fooled into thinking that this need be a quiet resort. Ktima (Upper Pafos) forms the traditional colonial centre and its old Turkish Quarter is especially low-key, while Kato Pafos (Lower Pafos) is where the tourists head, for its endless array of bars, nightclubs and dining opportunities. 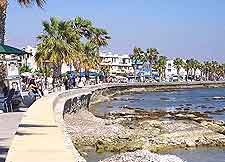 Cypriot tourist information is available in both Ktima (on the Gladstonos) and Kato Pafos (on the Posidonos), at branches of the popular Cyprus Tourism Organisation (CTO). The CTO offers brochures about hiking, cycling and exploring Cyprus in general, while there are also several modern Infopoint booths dotted around Paphos, offering touchscreen information. Those planning Paphos holidays should take into account the seasonal demand for accommodation. Hotels are at their busiest during the summer season, and outside of this period, prices can drop substantially, particularly during the low season - November to March. 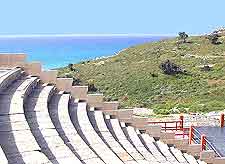 It is the beaches of Paphos that draw the biggest crowds by day, and in the summer, crowds of tourists and sunbathers flock to the beaches of Alykes, Faros, Kissonerga Bay and Vrysoudia. The Municipal Beach is especially popular and resides within central Kato Pafos, next to the Posidonos. Around the Mediterranean, tourists will discover a number of leading scuba diving sites and old shipwrecks, while for families, it is the Pafos Bird Park and the Pafos Aquarium that feature prominently on any holiday itinerary, as well of course as a trip to the simply awesome Aphrodite Water Park. More information about Paphos Tourist Attractions and Paphos Beaches. 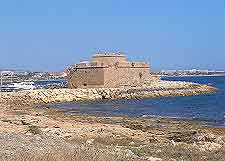 Around the Paphos area and away from the beaches, some incredibly historic World Heritage Sites beckon tourists looking for something a little more cultural. The ancient remains at the Nea Paphos Archaeological Site are quite spectacular and memorable. Other 'must-sees' include the Tombs of the Kings, the Fort of Pafos, the Agios Lambrianos Rock-Cut Tomb, Hrysopolitissa Basilica and St. Paul's Pillar, and Agia Paraskevi, many of which are within easy walking distance of each other. More information about Paphos Landmarks and Monuments. 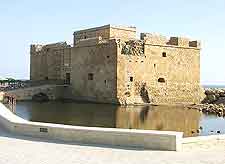 As well as the beaches of Paphos and the obvious tourism, the town does also feature a number of quality museums and similar cultural attractions. Tourists usually enjoy spending time at the Agios Georgios Museum, the Archaeological Museum and the Ethnographical Museum, while visits to the neighbouring Steni Museum of Village Life come highly recommended as well. For a taster of Cypriot art, be sure to search out the Byzantine Museum and marvel at its religious paintings and ecclesiastical treasures. More information about Paphos Museums and Paphos Art Galleries. 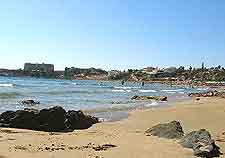 Travellers venturing outside of Paphos will soon discover that south-western Cyprus is rich in tourist attractions. The Akamas Peninsula in particular is a great place to lose yourself in Cypriot nature and is something of a Mediterranean wilderness. Coral Bay, Limassol and Polis are also within reach of Paphos and an endless array of beaches and recreational activities, ranging from hiking and mountain biking, to cycling and water sports. More information about Paphos Attractions Nearby.