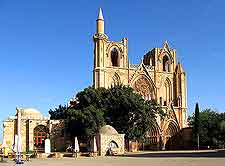 Famagusta (Gazimagusa) is a large walled city and is quite different to any other place on Cyprus. Formerly a buzzing tourist resort attracting huge crowds, the fortunes of Famagusta changed dramatically in the 14th-century, following a serious attack by the Ottomans when it was under Genoese control.

History began to repeat itself in 1974, when the Turkish Invasion took place and the city's exceedingly popular Varosia (Maras) beach and hotel strip was sealed off behind barbed wire. However, Famagusta is still a fairly sizeable city and although its distant crumbling buildings create a ghostly atmosphere, there really is something quite appealing about this place, such as its ancient ramparts and sites of archaeological interest, large harbourfront and understated, relaxed tourism scene, which is considerably quieter than that of nearby Ayia Napa. 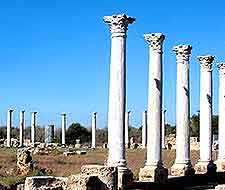 Holiday makers in Famagusta are advised to pay a visit to the office of the North Cyprus Tourism Organisation (NCTO) on the Istiklal Caddesi, which stands within the city walls, in the White Tower and next to the Land Gate. The MCTO offers in-depth Cypriot tourist information, along with a free 'City Plan of Gazimagusa', which comes in both English and Turkish.

The Old Town still holds much interest for tourists and holiday makers visiting Famagusta and this is a good place to begin your sightseeing. A good way to start your exploration is to join the open-top Red Bus Tours, which depart from nearby Protaras and provide English commentary as you pass the main places of interest. 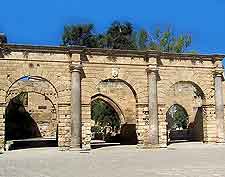 If the hot Cypriot sunshine is what you crave, then Famagusta is conveniently close to some sumptuous sandy beaches, which come in the form of the Bediz, Glapsides and Nagomi beaches, although it is the sandy stretch next to the Palm Beach Hotel that draws the largest crowds of sunbathers and beach-goers. And if you need to cool down, then go for a swim or snorkel, or join a scuba diving expedition. More information about Famagusta Tourist Attractions and Famagusta Beaches. 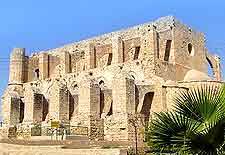 Famagusta is home to some stunning ruins and ancient sites of archaeological interest, including Roman and Turkish baths, old Orthodox churches and beautiful mosques. The Venetian Walls and related bastions add much character to Famagusta, and it is actually possible to walk along these walls, allowing tourists to enjoy some unusual cityscape views. Alternatively, climb to the top of the 12th-century Othello's Tower (Citadel) and be sure to capture the expansive scenery on your camera. The Lala Mustafa Pasha Mosque and Old Kirtikli Bathhouse (Kertikli Hammam) are further landmarks of note. More information about Famagusta Landmarks and Monuments. 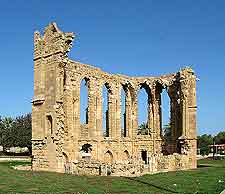 Filled with information about the city's rich Cypriot, Greek and Turkish heritage, the museums of Famagusta are quite impressive. The Namik Kemal Prison Museum is especially popular and is housed within the city's magnificent Venetian Palace (Palazzo del Provveditore ). With an extensive collection of religious paintings and artefacts, the St. Barnabas Icon and Archaeological Museum is also of note, as is the Canbulat Museum and its Ottoman treasures. More information about Famagusta Museums and Art Galleries. 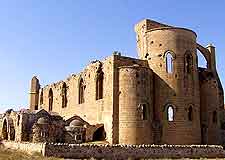 All around the shoreline of Famagusta are beaches, coastal sights and enticing day trips. Excursions to nearby Ancient Salamis are simply essential and this ranks as the island's number one attraction. Ancient Salamis dates back around 1,000 years and features a mixture of ruins, including columns, temples, an amphitheatre and the Basilica of Agios Epifanios. On a similar theme, Ancient Enkomi is even older and its history can be traced back to 1800 BC. Quite different and full of energy, the seaside resorts of Ayia Napa and Larnaca are but a short drive from Famagusta and overflowing with sublime beaches and pulsing Cypriot nightclubs. More information about Famagusta Attractions Nearby.