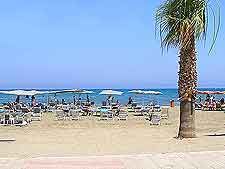 The Larnaca (Larnaka) area of Cyprus has a long history of tourism and the city boasts a truly stunning setting, on the southerly Mediterranean coast, where it is home to the island's premier airport. Once a sleepy town, the Larnaca of today has managed to retain much of its earlier charm, whilst catering to the regular influx of sun-seeking, beach-going, night-clubbing holiday makers.

There really is plenty for everyone in Larnaca, with its characterful and historical Turkish Quarter being a labyrinth of traditional streets, white-washed Cypriot housing and local craft shops. Close by and along the bustling, palm tree-lined Leoforos Athinon / Athinou Avenue (Finikoudes Promenade), a myriad of shops and chain stores present themselves, while nearby and close to the Sun Hall Hotel, tourist information is available at the office of the Cyprus Tourism Organisation (CTO). 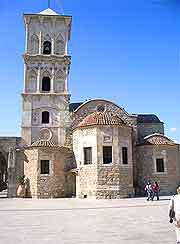 The Mediterranean beaches of Larnaca are very appealing and many are quite natural and uncommercialised, winning the Blue Award for general cleanliness. Castella, Dhekelia, Finikoudes (Phinikoudes) and the Cyprus Tourism Organisation Beach are amongst the most significant and offer everything from windsurfing and swimming, to jet ski rides and parascending. Scuba divers also flock to Larnaca from all over Cyprus, since the adjacent coastline is home to the awesome colonised Zenobia ferry wreck, which is nothing short of world-renowned. Those who don't fancy an afternoon's scuba diving can still see the Zenobia, by joining a regular trip on the SADKO Tourist Submarine, which can accommodate around 40 passengers in total. Package holidays in Larnaca have long been a popular choice for both families and couples alike, with the beaches drawing the crowds by day, and the lively nightclubs filling up with partygoers once the sun has set. More information about Larnaca Tourist Attractions and Larnaca Beaches. 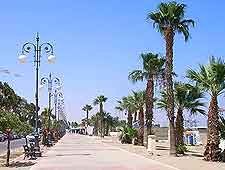 Larnaca is certainly a notable resort and its attractions cater well for the needs of holiday makers and sightseers, although most are fairly modern and commercial. If you wish to get to known the 'real' Larnaca, then you will need to pay a visit to some of its oldest landmarks and buildings. The majestic waterfront Larnaka Fort should of course be your very first port of call, followed by the Church of Agios Lazaros and the Grand Mosque (Buyuk Camii). There are even some visible archaeological remains of the historic site of Ancient Kition, over which the modern city of today stands. More information about Larnaca Landmarks and Monuments. 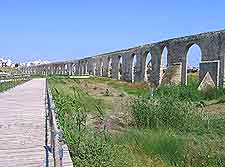 Amidst all of the bars, beaches and clubs, there are some really good museums scattered around central Larnaca. The Pierides Archaeological Foundation Museum and the Archaeological Museum (Eparkhiakó Mouseio) are both of a similar theme and house Mycenaean relics, information and artefacts from Neolithic, Iron Age and Roman eras. If you are planning to explore Larnaka Fort, then its onsite Medieval Museum will likely be of interest, as may the Municipal Museum of Natural History at the Municipal Gardens. More information about Larnaca Museums and Larnaca Art Galleries. 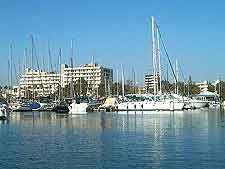 There are some holiday makers and tourists who come to Larnaca each year and rarely venture far from their hotel pool or adjacent beach. However, others wish to take full advantage of the resort's central location on the southerly Mediterranean coast, enjoying day trips to surrounding beaches, Famagusta, the Hala Sultan Tekkesi (Mosque of Umm Haram), Kiti and the Larnaka Salt Lake. For tourists with an interest in history, an excursion to the UNESCO World Heritage Site of Choirokoitia comes highly recommended, while for beach-goers and night-clubbers, the magnetism of Ayia Napa is quite undeniable and the atmosphere intoxicating. More information about Larnaca Attractions Nearby. 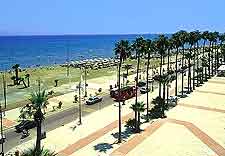