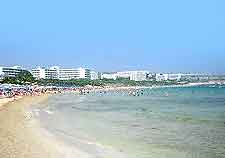 In the past few decades, Ayia Napa (Aya Napa / Agia Napa) has transformation from a tiny fishing village into an enormous and high-spirited tourist resort, famous for its wonderful beaches and celebrated nightlife. It was in 1974, following the Turkish invasion, that the Varosia beach strip in nearby Famagusta was closed down and the tourists naturally began to head next door to Ayia Napa.

There is no denying that Ayia Napa very much targets the tourist package holiday market, with self-indulgent themed bars and pulsing nightclubs staying up until the early morning and offering an extremely hedonistic atmosphere. Ayia Napa's tourism is also very appealing to families and British tourists in particular, who come here to soak up the sun of the wondrous Mediterranean beaches.

The Cyprus Tourism Organisation (CTO) on the Leoforos Kryou Nerou is the place to come for local Cypriot tourist information and lies to the south-east of the central Plateia Seferi. 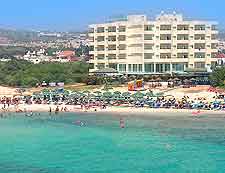 The incredible beaches of Ayia Napa are simply beautiful and combined with endless Cypriot sunshine, calm blue waters and often nearby bars, really are a great place to relax. Nissi Beach, Grecian Bay and Makronisos Beach are all extremely popular and very nearby, while those around Cape Greco are also of a high standard and a good place to watch people jumping into the sea from the rocks. Once your tan is topped up, there are a number of appealing Cypriot tourist attractions to choose between. Consider joining the open-top Red Bus Tour, or cruising along the Mediterranean coastline. On the hottest of days, you can cool down at Ayia Napa's awesome WaterWorld Waterpark, or enjoy an afternoon's scuba diving around sunken shipwrecks. For thrill seekers, Bungee jumping over the sea is available during the busy summer holiday season. Whilst cheap holidays in Ayia Napa are available in the summer, it should be noted that hotels become all the more affordable outside of the peak season, with the low season generally falling between November and March. More information about Ayia Napa Tourist Attractions and Ayia Napa Beaches. 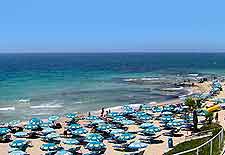 Holiday makers don't really come to Ayia Napa for its Cypriot history and heritage, but more for its sun, sea and nightclubs. However, tourists are often surprised to find a number of old landmarks and places of interest, which provide a refreshing alternative to the beaches. The Ayia Napa Monastery is one such attraction and dates back to the latter part of the 16th century, being built by the Venetians. Considerably older is the neighbouring Makronissos Tombs, which is an ancient archaeological site with Neolithic burial chambers, set within a former quarry. More information about Ayia Napa Landmarks and Monuments. 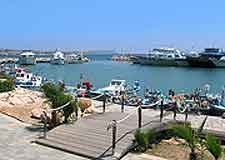 Tourists who like to learn more about their surroundings will find some interesting information about bygone days in Ayia Napa at its two main museums, the Pierides Municipal Museum of Marine Life (Tornaritis) and the Pierides Municipal Museum of the Sea (Thalassa). Both of these cultural attractions concentrate on aspects of the coastline, as well as the importance of preserving the underwater landscape. The Thalassa is known for its lively events and even boasts its very own outdoor amphitheatre. Ayia Napa's Pierides Foundation Avgorou Folk Art Museum is also of note and is dedicated to a plethora of traditional Cypriot folk art from the 18th century onwards. More information about Ayia Napa Museums and Ayia Napa Art Galleries. 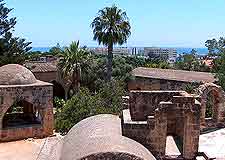 South-eastern Cyprus is a very appealing part of the island and deserves exploration. Tourists who have chosen to rent a car during their stay will soon realise that Ayia Napa is just a short drive away from some very intriguing and enticing attractions. These include the Cape Greco National Park, the walled city of Famagusta, the villages of Kokkinochoria, and the charming town of Paralimni. Also close by is the leading seaside resort of Larnaca, where a waterfront promenade lined with palm trees, cafes and bars beckons day trippers. More information about Ayia Napa Attractions Nearby. 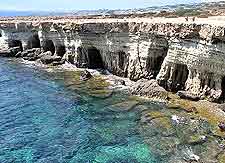