Georgia pretty much sums up everything the American South represents. This is a place of extremes, from the landscape to the politics, from antebellum architecture to Atlanta's super malls.

In 1788, Georgia became the fourth state to join the Union, while in the 1820s, gold was discovered here, leading to an influx of white immigrants. Along the way, many Native Americans were ousted, including the Cherokees. During the 19th century, Georgia found itself at the heart of the American Civil War, with bloody battles taking place throughout the state, including in Atlanta. The burning of Atlanta led to some unforgettable scenes in 'Gone with the Wind', written by Margaret Mitchell. In 1939, this epic novel was turned into an Academy Awards winning film.

A small part of the Blue Ridge Mountains runs through the northern part of Georgia. These mountains are so named because from a distance, they appear to be a hazy blue in color. For Georgia's earliest settlers, this was a place where you could fell timber and farm the land. Today's visitors might spend more time admiring its authentic-looking mountain towns, fast-running streams and cozy-looking log cabins.

Georgia is one of the US states most regularly affected by tornadoes and hurricanes. The twister season tends to start in March and runs for roughly three months.

In 1996, Georgia's capital, Atlanta, staged the Summer Olympics. Among the opening ceremony acts was Gladys Knight singing the official state song, 'Georgia on My Mind'. The Games were, however, marred by the Centennial Olympic Park bombing. Georgia's main sporting claim to fame is its role as host of the Masters Golf Tournament, which has been staged at the Augusta National Golf Club since the year 1934. 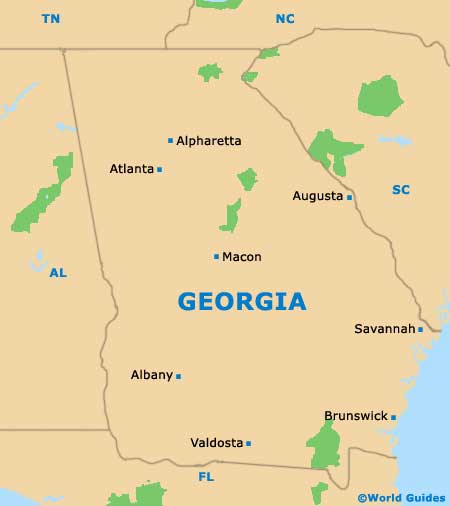