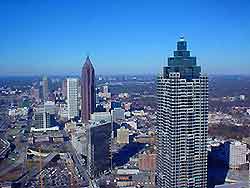 Atlanta is an enormous and sprawling city, and is constantly expanding, with no real barriers to prevent it from continuing to grow indefinitely. Located in the state of Georgia, Atlanta is known throughout the world for being a major business city, although it is also home to many superb tourist attractions.

As a result of hosting the extremely successful 1996 Olympic Games, much of Atlanta has been redeveloped and the elegant city center is full of superb shopping districts and a thriving restaurant scene. Atlanta's skyline is dominated by shiny skyscrapers, with the suburban districts actually being larger than many towns in America. Locals in the area are known for their gentle Southern accent and friendly nature.

The Atlanta Convention and Visitors Bureau is located on Peachtree Street Northeast, while further tourism centers are to be found at Lenox Square (in the Buckhead area), the Underground district and at the nearby Hartsfield-Jackson Atlanta International Airport. Maps of the city are available at all of these outlets and are worth picking up if you are planning to properly explore the Downtown and Midtown districts, or the West End area, which is listed on the National Register of Historic Places and lies to the southwest of Castleberry Hill. 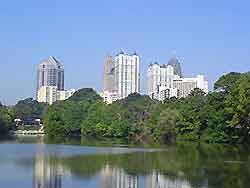 The city of Atlanta is home to a diverse selection of hotels, generally suiting all budgets. Hotels can be found throughout the city center and there are also numerous hotels located along Courtland Street, Lenox Road Northeast, Northside Drive, Peachtree Street and Piedmont Road. If you require budget accommodation, your best bet is to stay within the suburbs of Atlanta, close to the MARTA railway line, on roads such as the Buford Highway and the Ponce de Leon Avenue, and then travel into the city center each morning by train - a journey time of just over 30 minutes. More information about Atlanta Hotels.

Atlanta has numerous popular tourist attractions, including World of Coca-Cola Atlanta - celebrating the world-famous soft drink with exhibits and classic memorabilia; the Georgia Aquarium - amongst the largest aquariums in the world, featuring over 100,000 animals; Six Flags Over Georgia - an enormous theme park containing some of the country's best rides; Zoo Atlanta - home to a range of zoo favorites and dedicated to conservation; the Georgia Dome - the biggest cable-supported dome in the world, hosting many of Atlanta's principal events; and the CNN Center - a major building in the city, housing international broadcast studios of the CNN News Group, together with shops and entertainment venues.

Other main tourist attractions in Atlanta include the Centennial Olympic Park - a large plaza area in the city center, with the 'Fountain of Rings' celebrating the city's 1996 Olympic Games; the Martin Luther King, Jr. National Historic Site - including the historic Ebenezer Baptist Church; the Georgia State Capitol - a striking piece of 19th-century architecture, opened in 1869 at the cost of almost a million dollars; the Sandy Springs Historic Site - full of period buildings and beautiful old-fashioned gardens; The Cathedral of St. Philip - one of Georgia's most important historic buildings, dating back to the mid-19th century; and the Atlanta Botanical Gardens - located in Midtown and comprising landscaped areas and woodland trails. More information about Atlanta Tourist Attractions and Atlanta Landmarks. 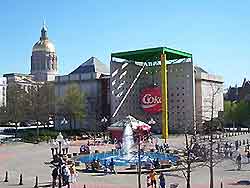 For museums and culture, pay a visit to the Atlanta History Center - a popular museum full of historic information about the South; the Fernbank Museum of Natural History - a vast venue with dinosaur skeletons, an IMAX theater and an aquarium; Imagine It! / Children's Museum of Atlanta - containing a number of themed zones and interactive exhibits; the Margaret Mitchell House and Museum - housing information about the life of popular author Margaret Mitchell; the Atlanta Art Gallery (TULA) - the city's premier art gallery, featuring works by Picasso; the High Museum of Art - with a fine collection of modern and more traditional art; and the Atlanta Contemporary Art Center - a major art center actively promoting modern art in the city. More information about Atlanta Museums and Atlanta Art Galleries.

Tourist attractions located near to Atlanta include the nearby Coca-Cola Space Science Center - operated by the Columbus State University, including the popular Space Science Center attraction; Hay House - a lavish building in the Italian Renaissance style, featuring ornate antiques and period furnishings; the Georgia Museum of Art - the official art museum of Georgia, close to central Atlanta; the State Botanical Gardens of Georgia - including a three-story research facility and a host of exotic plants; and the Tubman African American Museum - named after Harriet Tubman, with information about preserving the African-American heritage. More information about Atlanta Attractions Nearby. 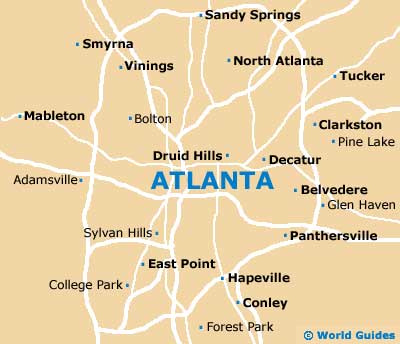