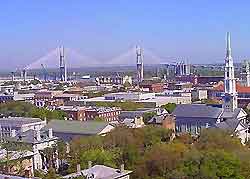 Savannah stands in the Chatham area of Georgia (GA) and Savannah has become one of America's more beautiful and historic cities, dating back to 1733. Around 28 km / 18 miles from the coast next to the Savannah River, the city is famous for its Historic District, which is home to many of Savannah's most notable buildings, including the breathtaking Cathedral of St. John the Baptist.

River Street and City Market in Savannah are the main commercial and tourist areas, offering many waterfront restaurants, bars and converted warehouses. Many popular and affordable modern hotels and historic inns can be found throughout Savannah, with some of the main hotels being located along central River Street and Bay Street.

A number of hotels stand directly on the Savannah River, with ferry services into the city center, and also close to the beachfront on nearby Tybee Island. Further hotels can be found next to the Savannah Convention Center and Savannah International Airport (SAV), which lies to the west of the city. More information about Savannah Hotels. 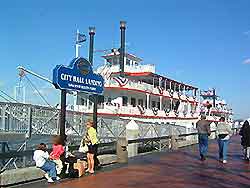 Located adjacent to the Atlantic Ocean, Savannah has long enjoyed a major tourism industry and actively promotes its many tourist attractions. The city's main tourist information center is the Savannah Convention and Visitors Bureau along 101 East Bay Street. Here you will find general tourism information, leaflets and brochures, booking services, maps and information about public transport. The main tourist areas of Savannah are the Historic district, Southside, the Victorian district, West Chatham County and the Eastside islands, which include Tybee, Oatland, Talahi, Whitemarsh and Wilmington. 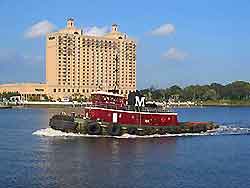 Tourist attractions located near to Savannah include Blythe Island Regional Park - a scenic area close to Savannah, with a host of outdoor activities and a popular beach area; Brunswick History Museum - located in historic Lissner House close to Savannah, with information about the region's history; Emerald Princess Cruises - a luxury cruise liner offering tours of the surrounding area; Mary Miller Doll Museum - a short drive from Savannah, home to a large collection of dolls and information about miniature toys; Mary Ross Waterfront Park - a pleasant stretch of greenbelt near to Savannah, with a pavilion and amphitheater; and St. Simon's Island - including St. Simons, Little St. Simon's, Sea and Jekyll islands, with regular diving, fishing and sailing outings. More information about Savannah Attractions Nearby. 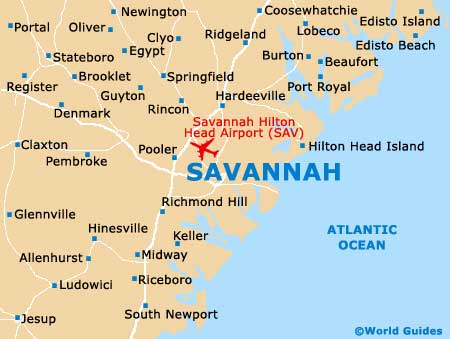