For many people, Staffordshire and 'The Potteries' are interchangeable words for the same area. In fact, The Potteries is a term used for the industrial part of Stoke-on-Trent that has long been a centre for the manufacture of ceramics. Names like Doulton and Minton, Aynsley and Wedgwood spring to mind. This is an area characterised by the English writer Arnold Bennett's tale of 'Anna of the Five Towns', written in 1902.

Perhaps one of the best ways to explore Staffordshire is to hire a narrow boat and cruise the network of canals that criss-cross the county. Originally built to transport delicate crockery to nearby major cities, the canals give city dwellers a chance to enjoy life in the slow lane and admire Staffordshire's industrial past and present.

Staffordshire isn't all about pots. Sandwiched in between the urban sprawl of Birmingham and Manchester, this is a remarkably rural county. In the south of the county, Cannock Chase is a mixture of woodland and open heathland that attracts both walkers and mountain bikers who are keen to escape city streets.

The Peak District also runs through the county. It is here that you can find the highest village in Britain. Located a short distance from the town of Buxton, the tiny village of Flash is home to less than 100 people.

Staffordshire hit the headlines in 2009 when the Staffordshire Hoard was discovered in a field near to Lichfield. These Anglo-Saxon artefacts were eventually bought by museums in Birmingham and Hanley, keeping them relatively close to the field in which they first saw the light of day after several centuries in hiding.

Some of the most charming features in and around Lichfield include its cathedral, with its distinctive three spires, and the stately Shugborough Hall. Staffordshire also regularly attracts coach loads of thrillseekers who come here to visit Alton Towers, a popular theme park with a vast range of rides and other attractions. 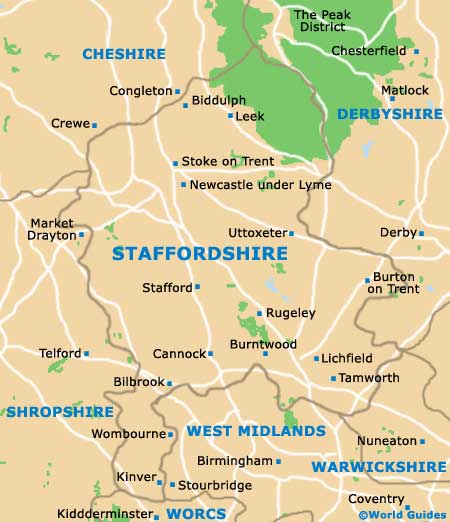