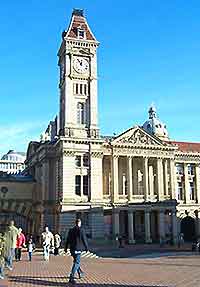 Birmingham is the second-largest city in the United Kingdom and has a population of more than one million. With many cutting-edge redevelopments, combined with historic, heritage architecture, Birmingham has become a stylish city and surprisingly actually contains more miles of canals than Venice.

In recent years, the important city of Birmingham has undergone a dramatic transformation and this is still continuing. The city's impressive business redevelopment has made Birmingham a major destination for shopping, with the new Bullring complex, famous Selfridges department store and Mailbox designer centre attracting literally thousands of tourists annually. Located in the heart of the city, the Tourist Information Centre (TIC) resides on the City Arcade, where the fortnightly 'What's On' paper is available. Further tourism brochures and magazines are to be found within most hotel lobbies, with a secondary TIC being sited at the National Exhibition Centre, just outside of the city and towards Coventry.

Birmingham continues to plan and build many exciting, modern and stylish business and leisure developments throughout the city centre, whilst protecting the glorious, historic architecture nearby. Large leisure complexes, including multiscreen cinemas and tenpin bowling alleys, have proved popular attractions. Other important additions to Birmingham include health and fitness clubs, sophisticated restaurants, bistros, bars and art galleries. 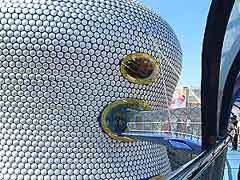 Birmingham attractions include Cadbury World - located in the famous Bournville area of the city. This historic chocolate factory features many impressive, interactive exhibitions, suitable for all of the family. Also popular are the steam railways - which provide a scenic way to travel into the surrounding countryside; Big Brum - Birmingham's answer to London's Big Ben; Aston Hall - a fine 17th-century Jacobean country mansion, filled with antique furniture and period features; Nelson's Statue - an impressive 200-year-old statue of Admiral Horatio Nelson; the National Sea Life Centre - a major tourist attraction for children and families, with sharks, fish, giant turtles, rays, and an underwater glass tunnel; Dudley Zoo and Castle - home to many rare animals, endangered species and highly regarded for its impressive conservation work; St. Chad's Cathedral - an important Gothic-style Roman Catholic cathedral; and St. Philip's Cathedral - built in the early 18th century with stunning Baroque-style architecture. Parks and gardens in the city include Cannon Hill Park - with playground areas and a large boating lake; the City Centre Gardens - next to the Birmingham International Convention Centre, the perfect city oasis; Sutton Park - the largest park in the whole of the city, covering 80 hectares / 200 acres; and the Birmingham Botanical Gardens - opened almost 200 years ago, with large glasshouses full of tropical plants, a huge collection of cacti and succulents, ponds, water features, flower borders and home to the National Bonsai Collection. More information about Birmingham Tourist Attractions and Birmingham Landmarks. 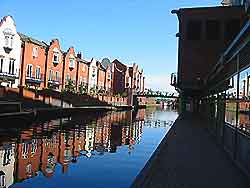 Birmingham also has a number of excellent museums, packed with regional West Midlands information and related exhibits. The best include the Birmingham Museum and Art Gallery - filled with important, historic paintings; the Custard Factory - a vast media and arts centre; the Birmingham and Midland Museum of Transport - home to an enormous of historic vehicles; the Railway Museum - with a large number of beautifully restored steam locomotives; and the Black Country Living Museum - celebrating the industrial past around 100 years ago with numerous period buildings, a small historic town with shops - including an authentic Victorian sweetshop, a funfair with old-fashioned rides, guided tours of an actual coal mine, narrowboat trips, cafés, picnic areas and a gift shop.

Birmingham has been one of the leading cities for meetings and conventions for many years. In the city centre itself there are numerous hotels and venues with large meeting spaces. In particular, the Birmingham International Convention Centre, in the heart of the city, is a striking, modern building that opened in 1991. The Birmingham International Convention Centre has been home to the famous G8 Summit meeting of world leaders in the past. Also, on the outskirts of the city, the NEC Arena, which has staged important events such as the Horse of the Year Show, the Clothes Show, Gardeners' World, the BBC Good Food Show and regular concerts, all of which contribute to the popularity and wealth of this part of the West Midlands. Other major events in Birmingham include the recent staging of the World Indoor Championships of Athletics at the city's vast National Indoor Arena (NIA).