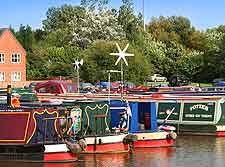 Affectionately referred to as 'The Potteries' and located in the heart of England, Stoke on Trent is home to some of the most important pottery manufacturers in the world, making this a very unusual and rather unique tourist destination. Stoke on Trent is the jewel of Staffordshire tourism and is famous for being the home town of international pop star Robbie Williams, whose songs often reference the city and include his biggest seller 'Angels', which is said to have been inspired by Burslem Town Hall's crowning golden angel statue.

It can be a little confusing to find your way around Stoke on Trent at first, since this city is actually made up of six adjoining towns (not five as many people mistakenly think) and also merged with Newcastle upon Lyme. Hanley is generally regarded as forming the city centre itself, being where the Tourist Information Centre is located, as well as the Potteries Shopping Centre, Regent Theatre and Victoria Hall. 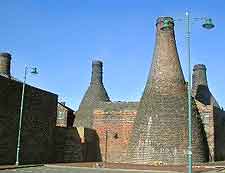 Each year some five million visitors come to Stoke on Trent, and its sustained tourism is certainly helped by its close proximity to the Alton Towers theme park and resort. In the city itself, the tourism industry was greatly enhanced in the 1980s, when the arrival of the National Garden Festival sparked a new interest in the city and the beginning of much revitalization. Today, the Festival Park contains many fun attractions, such as a ski centre, a modern cinema multiplex and the popular Waterworld aqua park. Close to Stoke on Trent, the Trentham Estate has also enjoyed a recent resurgence of interest, following considerable funding, and features beautiful Italian gardens, a forest where Barbary macaque monkeys roam freely amongst members of the public and two adventure parks for adrenaline junkies. For something more relaxing, Stoke on Trent also comes with more than 160 km / 100 miles of cycle trails and a particularly scenic stretch of the Trent and Mersey Canal. More information about Stoke on Trent Tourist Attractions. 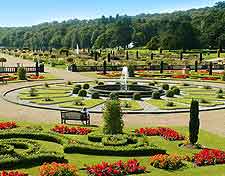 Staffordshire has much in the way of history and an number of grand houses and landmarks are located within the Stoke on Trent area. The magnificent Elizabethan-style Ford Green Hall is one such structure, as is the Longton Town Hall and the very nearby Little Moreton Hall, which actually resides just a short distance to the north, across the county border and in Cheshire. To the south, Shugborough Hall is an important stately home of generous proportions and is now a National Trust property. Soccer fans in Stoke on Trent may well be lucky enough to catch a game at the city's prestigious Britannia Stadium, where interesting, the ashes of English soccer legend Sir Stanley Matthews (1915 to 2000) are actually buried beneath the football pitch, since he was born in Hanley and played for Stoke City for almost 20 years in total. More information about Stoke on Trent Landmarks and Monuments. 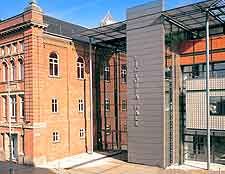 For most, it is the myriad of potteries and related pottery museums that are the main reason to visit Stoke on Trent, and these are especially plentiful around Burslem, Hanley and Longton. Potteries often provide factory tours, information about the manufacturing processes, ceramics shops and even the opportunity to create your own piece of pottery. The biggest names in the world of Staffordshire pottery all reside within Stoke on Trent and include Dudson, Moorcroft, Portmeirion, Royal Doulton, Royal Stafford and Wedgwood, many of which also have their own factory outlets. The Potteries Museum and Art Gallery at Hanley displays some of the city's finest ceramics, as does the Wedgwood Visitor Centre and its new £10.5-million museum. More information about Stoke on Trent Potteries and Museums and Stoke on Trent Art Galleries. 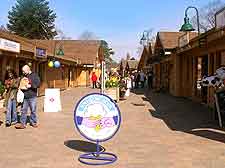 Staffordshire is a very appealing country to explore and day trips from Stoke on Trent are advisable. The Staffordshire Moorlands are close by, along with the Peak District National Park, the Apedale Community Country Park and the National Forest. Families will enjoy taking a day trip to the Drayton Manor Park, which is filled with fast rides and roller coasters, and frequently compared to Alton Towers. Lichfield, Stafford and Tamworth are also near to Stoke on Trent, with Tamworth being home to its famous indoor Snowdome complex. Those happy to travel a little further afield should consider excursions to the cities of Birmingham, Derby, Liverpool, Manchester, Nottingham and Sheffield, each of which really warrants more than a simple day trip if possible. More information about Stoke on Trent Attractions Nearby. 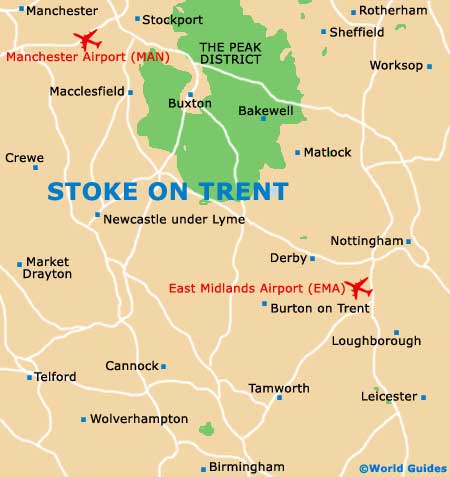