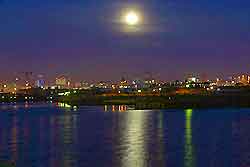 Known as the capital of the north, Manchester is one of England's leading cities and was actually the world's first industrial city. Manchester, where Rolls first met Royce, has managed to successfully reinvent itself over the last decade and has now become an exciting and vibrant city, being home to many spectacular buildings and architectural showpieces, including the Grade II listed Corn Exchange, the splendid Manchester Town Hall, many stylish, modern office blocks and the relatively new £150 million, 47-storey Beetham Tower - the highest living space in the United Kingdom

Manchester is without doubt a happening and trendy city, and is especially easy to navigate, thanks to the comprehensive Metrolink tramway. Various districts stand out and deserve exploration, and the centrally located Piccadilly Gardens is one such area. Directly to the west, the Millennium Quarter is also quite special, while to the north, the somewhat bohemian-style North Quarter is close to both Chinatown and Canal Street. On the south-westerly side of the city is Castlefield and the energetic Deansgate Docks, where waterfront restaurants are a plenty. For tourism in Manchester, visit the Tourist Information Centre in the Town Hall, just off St. Peter's Square, where you will be able to purchase tickets for all manner of guided walks and also take advantage of an inexpensive accommodation finding service. 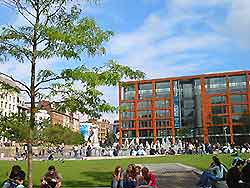 There is a vast selection of hotels in the city, with a good choice awaiting patronage around St. Peter's Square and Albert Square. As you would expect, the price of accommodation does increase significantly the closer you get to the actual city centre, and since the majority cater for business travellers, weekend break packages are commonplace, suiting tourists. Do bear in mind that if Manchester United are playing a match at their home ground, the world-famous Old Trafford Football Stadium, then accommodation at short notice is likely to be virtually impossible to come by. If you are struggling to find hotels in Manchester, then consider staying in the suburbs of Cheadle, Dukinfield, Oldham, Prestwich, Salford, Stockport, Trafford and Walkden, all of which are located within the metropolitan county of Greater Manchester.

Manchester has a wealth of attractions, including the Urbis - a stunning new museum resembling a huge glass triangle; the Town Hall - an enormous Victorian Gothic-style hall which dominates the central Albert Square; John Rylands Library - probably the city's most beautiful building, featuring a breathtaking reading room; Manchester Cathedral - standing proudly in the heart of the city, with many parts dating back to the 15th century; and an actual Concorde - one of the few remaining Concordes, the most famous plane ever made, now on permanent display at the airport's Aviation Viewing Park. More information about Manchester Tourist Attractions and Manchester Landmarks. 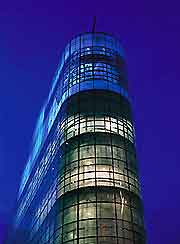 Manchester also has a number of cultural highlights, suiting visitors with a hunger for local information and history. These include the Manchester Art Gallery - the foremost art gallery with an impressive permanent collection of paintings and sculptures; the Museum of Science and Industry - the city's largest museum, with many interactive displays about the past, including a collection of steam engines and locomotives; Manchester Museum - a city institution for more than a century, with a mixture of natural history and social sciences; the Imperial War Museum - an aluminium-clad showpiece with a large collection of military memorabilia; and The Lowry - a dramatic glass and steel building containing around 300 original paintings and sketches by the city's most beloved artists, Lawrence Stephen Lowry.

The University of Manchester is located around 1.5 km / 1 miles to the south of the city centre and is one of England's most unique universities. With two excellent museums, comprehensive university facilities, some 40,000 students and a remarkable academic pedigree, Manchester University is a top-class educational institution. Closely linked to the city's history as the first industrial city in the world, Manchester University dates back around 200 years, when the Mechanics' Institute was formed, and also combines with the Victoria University, which was founded in 1851.

Manchester is home to vibrant gay and lesbian scene and the city is considered to be one of the most important gay destinations in England. With many gay friendly bars, clubs and hotels, Manchester has a thriving gay community. Canal Street, in the Rochdale area of the city, is located between Princess and Sackville Streets, at the heart of the Gay Village area. It is this area of the city that featured heavily on Channel 4's television gay soap 'Queer as Folk'.

Few cities in the world can compare to Manchester and the way that it has evolved with change over the years. Manchester has embraced change, redevelopment and design, producing many world-class buildings, shopping centres and houses, with impressive architecture. The city is a wonderful place to visit at any time of year and has an enormous amount to offer tourists.