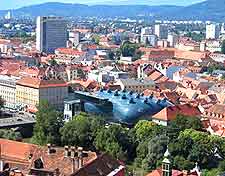 After Vienna, the university city of Graz is Austria's second-largest city and the Styrian capital. Graz is a laid-back city with a certain undeniable charm and a rather surprising trendy element. The period architecture around Graz is occasionally punctuated by some truly funky buildings, and nothing can be more unexpected than the Kunsthaus (Arts Centre), which at first glance appears to be a suspended bubble.

However, it is the Grazer Schlossberg mountain and its eye-catching fortress that dominates the city and provides a scenic backdrop to many views, being edged by the River Mur. Those feeling energetic can climb the steps to reach the top, although most prefer to simply climb aboard the funicular railway (Schlossbergbahn) for this journey.

The Hauptplatz marks the very centre of Old Town Graz and links many prominent streets, such as the city's main thoroughfare, the Herrengasse, which ultimately connects the Jakominiplaz, an important transport hub. Tourist information is available at the Tourism Centre (Graz Tourismus) on the Herrengasse, where all of your questions can be answered. 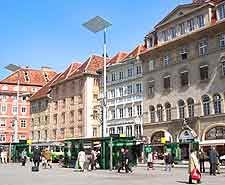 Apart from the Schlossberg and its ruined castle, Graz has plenty to offer visiting tourists, with historical attractions and modern sports stadiums. The Uhrturm (Watchtower) has become particularly iconic and known for its clockface, which features unusual back-to-front hands, while Renaissance architecture abounds at the Landhaushof. Soccer fans in Graz may be lucky enough to catch a game or two at the UPC Arena, which was previously named the Arnold Schwarzenegger Stadium, after this particularly famous former local resident. On a sunny day, you may even wish to wander down to the Copacabana, a lively, lakeside party beach. More information about Graz Tourist Attractions. 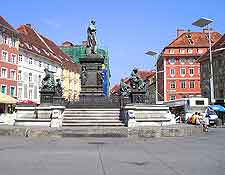 The Old Town (Altstadt) contains such a wealth of history that this area has now earned Graz the title of a UNESCO World Heritage Site. Many superb landmarks pepper the district and include Graz Cathedral itself, which is named the Domkirche and dates from the 15th century. Other prominent buildings are to be found around the Franziskanerplatz, the Sparbersbachgasse and the Hauptplatz, which is overlooked by the City Hall (Rathaus). On the western side of the city, the Eggenberg Castle is yet another landmark that is hard to miss and regularly plays host to classical music concerts during the summer months. More information about Graz Landmarks and Monuments. 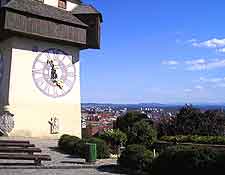 In recent years, Graz was awarded the prestigious title of European City of Culture and has continued to live up to its reputation. Quality museums, such as the Stadtmuseum, offer plenty of information about Austria's Styria region. The Landeszeughaus Armoury is worth a look and boasts an enormous collection of weaponry and artefacts. You may also like to pay a visit to the MuWa (Museum of Perception) or the Neue Galerie, which is part of the Johanneum Regional Museum and has a collection of more than 2,000 art works. More information about Graz Museums and Art Galleries. 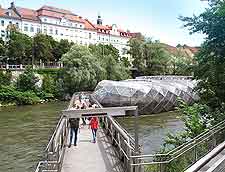 If you wish to head outside of Graz and experience a little more of Styria, then jump on the Semmering Railway and enjoy the glorious scenery as you travel past the mountains. Some tourists prefer to travel further afield and visit some of Austria's biggest cities, and both Salzburg and Vienna are just about close enough to manage a day trip or short break. Nearer to Graz and across the border in Slovenia, an excursion to Maribor may well be of interest, should you wish to experience a different country for the day. More information about Graz Attractions Nearby. 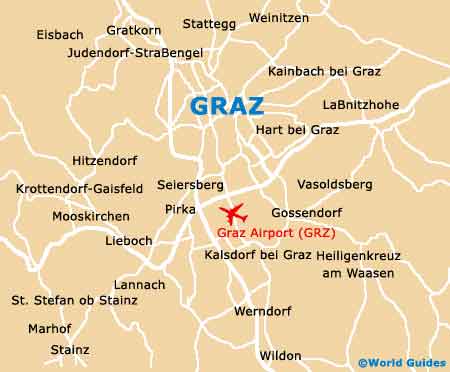