Maryland's mid-Atlantic location and agreeable climate makes it popular with holidaymakers throughout the year. Among its many attractions are pretty waterfront villages, mile upon mile of coastline, America's largest estuary at Chesapeake Bay, and some great views from the Allegheny Mountains.

History is never far away in Maryland. Baltimore's harbor was the scene of the Maryland War in 1812. It was to provide the US with two dominant symbols of its nationhood. A Baltimore flagmaker was commissioned to create two flags that were so large, the attacking British couldn't possibly miss them. They were delivered to Fort McHenry in August 1913 and were to become a key national emblem. The battle was watched by Francis Scott Key, who was inspired to write the 'Star Spangled Banner' in honor of those who defended Baltimore's Fort McHenry. It was soon set to music and, of course, eventually became the national anthem.

Maryland has amongst its many official state symbols a special state dessert, known as Smith Island Cake. Made by the good ladies of Smith Island for many years, this ten-layer confectionary delight has managed to achieve widespread fame in the US.

It was in one of Baltimore's tiny 'row' houses where America's most famous baseball player George Herman 'Babe' Ruth was born in the year 1895. Today, his birthplace is also a museum where thousands of Babe Ruth pilgrims come to pay homage to their hero.

Maryland is also home to the US Naval Academy, founded in 1845 in Annapolis. Notable graduates of the Academy include former US president Jimmy Carter. Of interest, it has educated more astronauts than any other American institution. 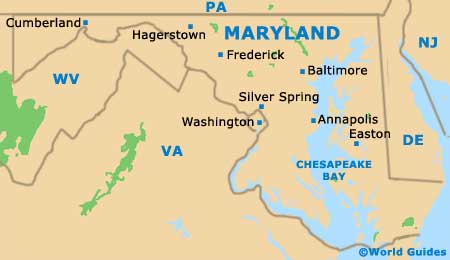