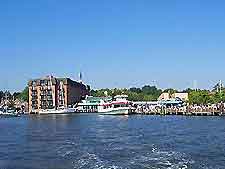 Capital of Maryland (MD), Annapolis has a rich colonial heritage, retaining many of its 18th-century buildings and historic character, although the city is very much a modern place to visit. Known for its State House, City Dock and scenic harbor, Annapolis dates back to the mid-17th century, when it was established as a port town.

Also home to the prestigious US Naval Academy, Annapolis features over 15 miles / 24 km of waterfront, including Chesapeake Bay, with many marinas, sailing boats and a host of water-based recreational activities. The city may not be as large as nearby Baltimore, but is a particularly engaging and charming tourist destination. 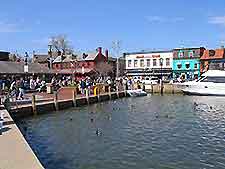 The most popular and most expensive accommodation in Annapolis is centered around the downtown region, close to many of the area's most prominent landmarks and historic attractions. Hotels in the downtown district are also well placed for shopping and fine dining and nearby restaurants. Further hotels in the Annapolis area are situated around the scenic City Dock area, along the waterfront, in the Eastport district and around West Street. More information about Annapolis Hotels. 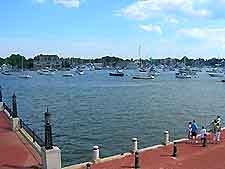 Annapolis has an assortment of tourist attractions, including Maryland State House - the oldest working American state capitol building; The Barracks - featuring a variety of historic furniture and fixtures used by soldiers during the American Revolution; Three Centuries Tours - enjoyable and educational historic tours of downtown Annapolis; United States Naval Academy - an impressive training complex for American naval officers dating back to 1845; and William Paca House and Garden - a delightful garden and house, which has been restored to its former glory. More information about Annapolis Tourist Attractions.

Some of the most prominent museums and art galleries here include the Annapolis Maritime Museum - presenting an insight into the city's fascinating maritime history; and also the Banneker Douglas Museum - offering a wealth of historic exhibits, information and artifacts dedicated to past African Americans in Maryland. More information about Annapolis Museums. 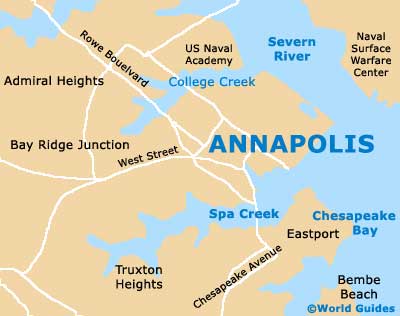