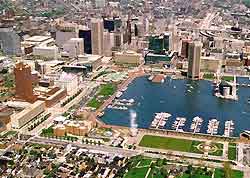 Baltimore is a vibrant city, where historical buildings and modern architecture stand side by side. The Inner Harbor area of Baltimore is one of the city's main tourist districts and contains many popular attractions. Downtown Baltimore features a thriving business district and nearby, Canton, Federal Hill, Fells Point, Little Italy and Mount Vernon are some of the city's oldest and more appealing neighborhoods, full of charm. Baltimore is famous for its superb ballpark, Camben Yards, which regularly attracts tourists from all over Maryland and beyond. This city has become a both a tourism and business destination, and is perhaps best known for being the birthplace of America's National Anthem.

Hotels are plentiful in Baltimore and are situated throughout the area, including the city center. Many affordable accommodation options can be found along Cathedral Street, O'Donnell Street, South Broadway, West University Parkway and Village Square. Further hotels are located close to the Baltimore Washington International Airport (BWI), which is around 10 miles / 16 km to the south and within the suburb of Linthicum. More information about Baltimore Hotels. 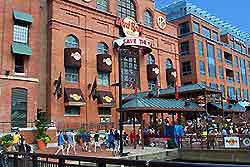 Tourism is thriving in the city and the Baltimore Area Convention and Visitors Center is well worth visiting, being located on Light Street, within the Inner Harbor area and close to the Federal Hill Park, Harborplace, Otterbein and the Maryland Science Center. Maps of the city are readily available here and clearly show the main places of interest in downtown Baltimore, Fells Point, the Mount Vernon Cultural area and the Southwest district.

Baltimore features numerous tourist attractions, with the most visited including the National Aquarium - with around 10,000 creatures and a magnificent Atlantic Coral Reef display; Maryland Zoo - known as the third-oldest zoo in America and including many popular African animals; the Maryland Science Center - a stunning modern building with numerous exciting hands-on attractions and information about modern science; the Pimlico Race Course - a world-famous racecourse, home to many of America's major horseback racing events; and Baltimore's Lexington Market - surprisingly the oldest continually operating market in the USA. 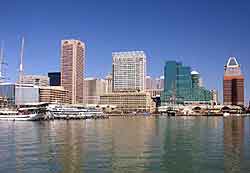 Other tourist attractions in Baltimore include the Washington Monument at Mount Vernon Place - a famous memorial to America's George Washington, built in 1815; the Fort McHenry National Monument and Historic Shrine - birthplace of the American national anthem; the Star Spangled Banner Flag House - one of the city's oldest buildings, with information about the War of 1812; the Baltimore Conservatory and Botanic Gardens - featuring three greenhouses, landscaped gardens and a host of exotic plants; and the Cylburn Arboretum - a vast nature preserve with gardens, woodlands and period buildings. More information about Baltimore Tourist Attractions and Baltimore Landmarks.

Baltimore also contains a number of highly regarded museums, such as the Baltimore and Ohio (B&O) Railroad Museum - reputed to the oldest railroad depot standing in the western hemisphere, with numerous classic locomotives; the Maritime Museum - featuring popular tours of the USS Torsk submarine and three WWII vessels; the Babe Ruth Museum - celebrating the life of this famous baseball star; the Streetcar Museum - with interesting information about the history of public transport in the city; the Port Discovery Children's Museum - full of hands-on exhibits and dedicated to providing fun education for children; and the Baltimore Museum of Art - boasting approximately 100,000 works, including art by Picasso, Cezanne, Monet and Van Gogh. More information about Baltimore Museums and Baltimore Art Galleries.

Tourist attractions situated near to Baltimore include the African Art Museum of Maryland - boasting African works of art spanning several centuries, textiles and musical instruments; the Ellicott City Firehouse Museum - with historic information about the area's fire-fighting services; the Howard County Center of African-American Culture - dedicated to African-Americans who have made major contributions to America's history; the Historic Oakland Manor - a stunning mansion surrounded by beautiful landscaped gardens; and the Thomas Isaac Log Cabin - a historic building, with information about the development of the region. More information about Baltimore Attractions Nearby. 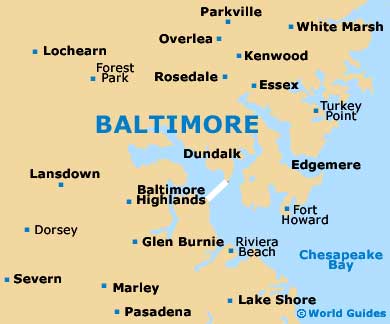